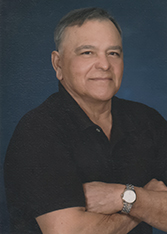 He was preceded in death by his father, Juan A. Estrada, Sr.; his mother, Esther (Herrera) Goulis; brothers, Henry and Alex Estrada and his sister, Olga Mae Flores.

Visitation for family and friends will be on Wednesday, March 8, 2017 from 5:00 PM till 8:00 PMwith a rosary to be prayed at 6:30 PM at Clayton Thompson Funeral Home in Groves. A Mass of Christian Burial will be celebrated at 11:30 AM Thursday, March 9, 2017 at Our Lady of Guadalupe Catholic Church in Port Arthur. Rev. Urbano Sáenz Ramírez will serve as celebrant. Full Military Honors will follow the mass at church. Arrangements for cremation are entrusted to Clayton Thompson Funeral Directors.

In Lieu of Flowers, the family is requesting donations to be made to the Scholarships Fund at Our Lady of Guadalupe Catholic Church, 3648 S/Sgt. Lucian Adams Drive, Port Arthur, TX 77642.