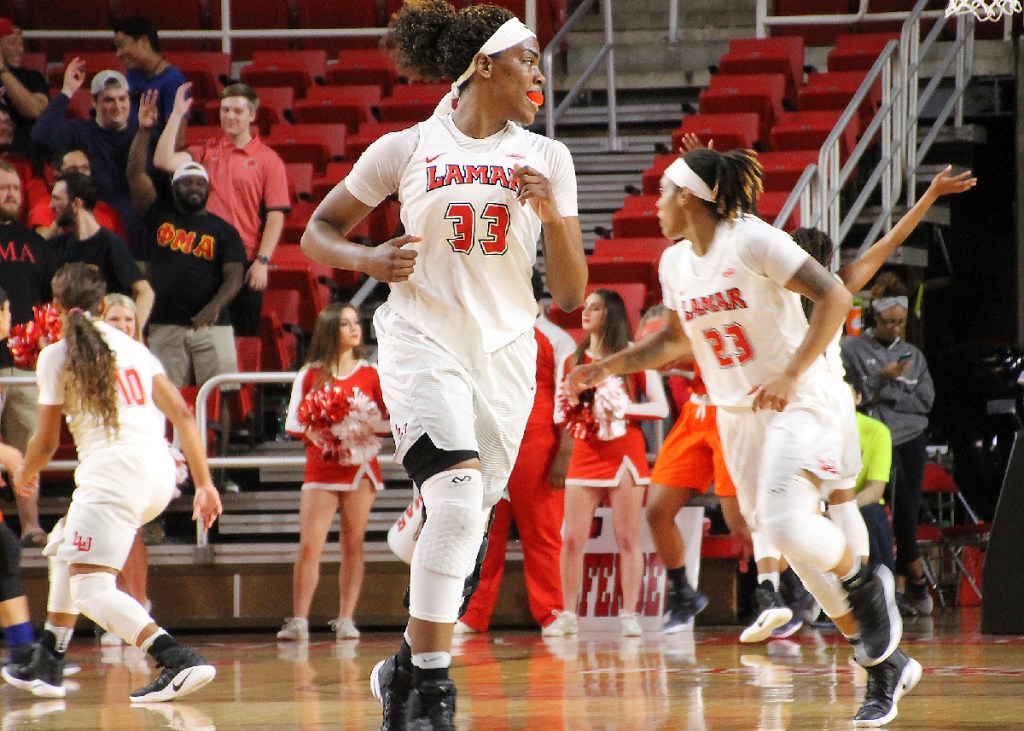 BEAUMONT — Down by 32 points in Salt Lake City, Lamar’s women’s basketball team nearly completed the comeback of a lifetime.

Kiandra Bowers had eight points and four rebounds in 18 minutes that November night in 2015 — and tore her ACL in a 71-67 defeat to Utah. There went the third-year starter’s season.

“I really didn’t know at first how I would bounce back from the injury,” she said. “I had doubts in my head, about if I was going to perform at a high level again. Once I got on the court, playing with my teammates, they gave me a lot of confidence, and I believed in myself more.”

This season, the 5-foot-11 senior center from West Palm Beach, Fla., has played like she never missed a step.

Bowers ranks in the top 25 among NCAA Division I players in four categories and leads the nation in offensive rebounds per game with six. Plus, the Cardinals have bounced back from a 12-19 record to 22-6 and a spot in the semifinal round of the Southland Conference tournament at Katy’s Merrell Center.

“She has matured,” Lamar coach Robin Harmony said. “When she was a freshman and sophomore, she was a starter for us. She was a double-double kid, not like she is now. She’s more mature, bigger, stronger, and she has that touch of finesse under the basket and the desire to rebound.”

Bowers has totaled 16 of those double-doubles this season, good for a 12th-place tie. Averaging 14.5 points a contest, she made second-team All-Southland Conference along with teammates Chastadie Barrs and Moe Kinard.

“I think my teammates put me in good position to score the basketball,” Bowers said. “I think they’re helping me a lot to get easy looks.”

Barrs was crowned Southland Defensive Player of the Year, but she also ranks 12th nationally in assists per game with 6.71. Kinard, a sophomore transfer from the University of Houston, was named Newcomer of the Year.

“We’re trying to win the conference tournament this weekend, and obviously, nationally, we’re getting exposure for Lamar with Chas and Bowers,” Harmony said. “Actually, the whole team is second in offensive rebounds and [first in] ratio for steals-turnovers. We have put together our team, finally. We’re happy to be 22-6. We know we’re going to get a lot better, but we’re not there, yet.”

Bowers always has been a solid shooter at Lamar, hitting 52.8 percent from the floor as a freshman and 57.2 percent as a sophomore, but this is her first season to average double figures in points and rebounds. She didn’t just focus on one aspect of her game or another in her bounce-back season.

Lamar finished third in team standings only behind co-champions Central Arkansas and Abilene Christian, but is seeded second in the Southland tournament because Abilene was ineligible for postseason play due to its Division I transition status. The Cardinals will take on Nicholls State, McNeese State or Stephen F. Austin at 1 p.m. Saturday in the semifinal round. Nicholls and McNeese will play at 1:30 p.m. Thursday.

“It’s better for us to rest and watch and not be tired, because it’d be tough, even for Kiandra, to play for four games,” Harmony said, her team having last played last Saturday at McNeese. “Even to play for three games, it’d be hard on her. So, two games is just perfect for all of us. We get through the first game, and it’s a battle, then you’re in the finals, and it’s emotions, then. It’s about desire and who wants it more.

Because of the medical hardship from last season, Bowers has one year of eligibility remaining, but she’s waiting until after the season to decide if she’ll return. The 2016 Southland Commissioner’s Academic Honor Roll athlete will earn her degree in communication in March.

Whoever the Cards play Saturday, Bowers sees the shortened road to the NCAA tournament as challenging.

“I think we are put in different positions in practice to prepare us for those games,” she said. “I’m glad we have the two byes. It gives us time to rest, but also more time to work on what we need to for the tournament.”