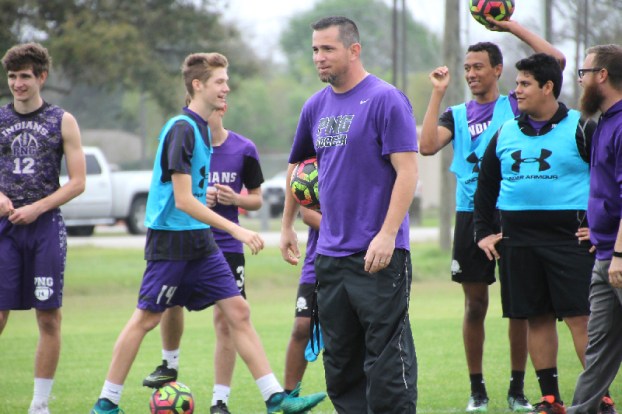 PORT NECHES — Try to stay undefeated through 11 games in District 22-5A boys soccer.

“If you look at the standings, we’re fortunate enough to be at the top of that,” fifth-year head coach Chad Luttrull said. “There’s Lumberton, which is really close to us, and then, there’s Vidor, Nederland, Memorial and Central all fighting for those last two playoff spots. It’s going to be a photo finish with those guys. It’s going to come down the last Tuesday.”

So far, PNG (18-1-2, 11-0 in 22-5A) is running an American Pharaoh-type race with three games remaining. The district uses a points system for its standings, and with a nine-point lead over second-place Lumberton, the Indians, who have 33, need just one point to win 22-5A outright.

Nederland and Vidor are tied for third with 18 (Nederland is ahead on a head-to-head tiebreaker), Central is fifth with 17 and Port Arthur Memorial had 13 prior to Monday’s game against Ozen.

It would be the eighth district title for Luttrull, who has 202 career wins in 11 seasons at alma mater Lumberton and PNG. The Indians last won the district in 2014.

But the 2017 team has turned heads with its consistent play. The Indians have scored 70 goals and allowed six in 21 games, posting 15 shutout victories. Their only loss came to Langham Creek (2-0) on Jan. 20 in Brenham.

“I think we can keep this going,” said junior Preston Riggs, whose 20 goals lead the Indians. “Our defense is holding things up.”

Senior Noah Riggs has been a standout inside the net with 13 shutout victories. Junior Nick Verberkt has the other two.

The biggest challenge for the older Riggs, he said, has been picking up where four-time all-state goaltender Bryce Meche left off.

“I just have a lot of weight put on my shoulders, and I guess with all these guys’ support, they’re believing in me that I can come out and perform every game,” Noah Riggs said. “It’s really been a big help.”

PNG has allowed only two goals in district play, one each from Livingston and Nederland.

The speed has been a big factor in PNG’s stalwart defense, Luttrull said.

“Chase Gordon in the back, this is his fourth year starting there,” he said. “It really shows. He’s a dominating factor in the back there.

“We’ve got speed in the midfleld and speed up front. We play a fast-tempo game. It’s really something that a lot teams don’t have and a lot of teams don’t handle.”

PNG utilizes that speed offensively, as well, to help Davalos set up goals. He has 10 assists, many of them going to Riggs, who’s connected on seven game-winners.

“It all starts with everybody putting in the effort to give me the ball and me giving it to Riggs because I know he can finish,” Davalos said. “That’s a big thing I see all the time on the field. He takes advantage of that.”

Port Neches-Groves’ Kellon Hoyte had a fun game Friday night, and it helped earn the Indians at least a share... read more