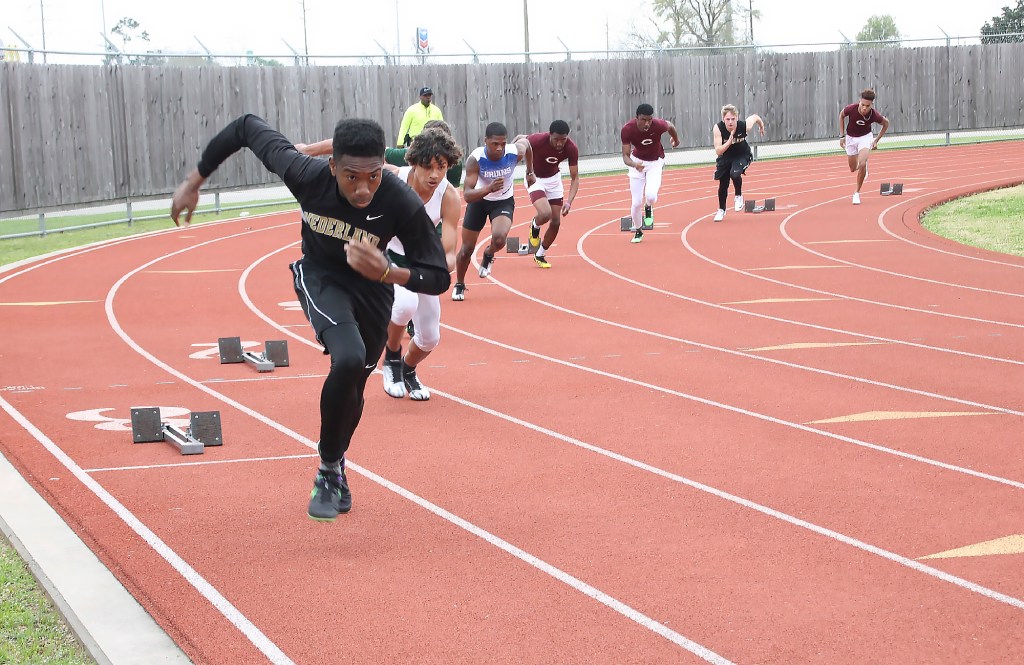 Dixon won the triple jump with a distance of 34 feet, 10 inches, beating East Chambers’ Emily Johnson by an inch. Duhon ran the 400 meters in 1:03.72, beating Leslie Moreno of Deer Park by 1.05 seconds. Kennedy Sanders and Da’ja Bernard were fifth and sixth in that race.

The 4×100 team of Duhon, Zykirra Cabarras, Coreyanna Gorrer and Capri Wilson beat Central to the line with a time of 49.26 seconds. Central’s time was 49.39.

Cabarras and Wilson took second and third in the 100-meter dash.

Millicent Neveu was fourth for the Titans in the 300 hurdles. She teamed with Cabarras, Dixon and Bernard on the third-place 4×400 team.

Anderson was sixth in the 800.

Reigning 6A state champion Kary Vincent Jr. won the 200 meters in 21.3 seconds. He turned in a personal record of 21.01 at last year’s state meet in Austin.

Memorial is a 5A school this year.

Next for Memorial is the Meet of Champions on Thursday at Katy High School.

LIBERTY — Amanda Longlet threw a six-inning no-hitter, and Nederland tagged seven hits of its own Saturday in the Liberty/Huffman tournament.

Madelyn Daniel, Victoria Garza and Longlet accounted for the other hits.

LIBERTY — Both teams brought much of the offense in the first inning, but Nederland hardly cooled off on its way to a second victory Saturday.

The Bulldogs (9-9-1) won the six-inning affair failing to score only in the second inning. They tallied three runs each in the first, third and fourth innings and one run in the fifth.

Hannah Smith went 3 for 4, while Lexi Eversole, Hannah Grumbles, Amanda Longlet and Jessica Saenz each totaled two. Madelyn Daniel and Bailey Beard each had a hit as well. Grumbles and Longlet each drove in two runs.

FANNETT — Amari Lewis went 3 for 4 at the plate, and Memorial won its fifth game of the season Friday at the Hamshire-Fannett tournament.

But Van Ellas, who threw a one-hit, scoreless inning, earned the victory.

FANNETT — Carlos Granados drove in three runs and hit 3 for 4, but the Longhorns got the better of the Titans (5-3) on Friday.

CROSBY — Nathan Vidrine held Cypress Creek to only three hits and struck out six in a complete-game win at the Crosby tournament.

PNG also was to play Dickinson, Cypress Falls and Crosby this weekend. The Indians will take on Houston Westside on Thursday in Lufkin.