PA gaming rules to be updated 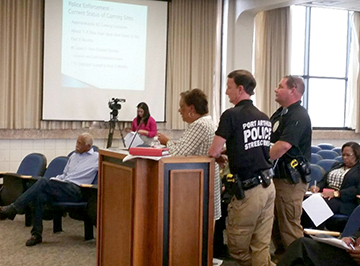 City leaders are taking a second look how they moderate game rooms and gaming machines and planning for a new ordinance governing the issue.

The original ordinance, which was approved in March 2015, lacked organization and listed several points of contact for those who own the establishments. On Tuesday councilmembers heard information from police officers, building official, planning and zoning department and assistant city attorney in a workshop to map a better plan.

There are approximately 60 gaming locations in the city, including game rooms and convenience stores with the machines. In the past six months, seven to eight sites have been shut down and at least three were denied permits due to location and code compliance issues, Port Arthur Police Officer Mike Hebert said.

In addition, 175 citations have been issued in the past three months.

But monitoring of the sites has dropped off a bit as a new ordinance with new guidelines will be drafted.

“When the ordinance first came out it hit us, it was an absolute nightmare,” Hebert said. “Now we have a team in place. We lacked teamwork from the very beginning. Now we have that.”

Vital told council that this is one of a few ordinances that are multi-departmental. For example, when someone comes to the city wanting to open a game room they must go through planning and zoning, acquire proper permitting and pay fees, the building must be up to code, and the business must not be within 300 feet of a school, hospital or church.

“We want to streamline the process and have a single point of contact for those who want to open a game room or have games in say, a gas station,” she said.

Vital is looking to Harris County’s permit process for guidance. The neighboring county has the documentation on their website, which is something Vital would like to emulate.

Parking is another issue to be tackled in the new gaming ordinance. For this the team is looking toward Galveston and Houston’s guidelines. There will be car parking requirements and restricted operation hours from 8 a.m. to 10 p.m., if the issue is finalized and approved.

The fee scale would also be changed. Originally there was a $100 application fee and $500 per machine fee.

“In the calculation of fees, this can’t be a cash cow for the city,” she said. “How much does it cost to enforce the ordinance? The application fee will go from $100 annually to $1,000. Another change is the fee per machine. It was $500 and is going to $400 per machine.”

The team also recommends fingerprint background checks for the owners and operators of the gaming establishments. The cost of this will be borne by the gaming owners.

Councilmember Willie “Bae” Lewis noted the 175 citations issued and asked how many citations does a business have to accumulate in order to be shut down.

“The business owner has 10 days to respond,” Hebert said. “For example, we went to a business and found the owner had did something fraudulent with the on-site issued state comptroller sticker. He had 14 days to respond. He didn’t.”

A loophole of sorts exists with the original ordinance where siblings of the owner can come in and take over the business.

“So once a location is shut down it can’t be barred from reopening?” Councilmember Osman Swati asked.

“The location has nothing to do with it,” Hebert answered.

Councilmember Tiffany Hamilton said she knows there are more than 60 gaming locations in the city — and police agree — so checking for compliance should be an easy task, especially if the establishment does not have windows or have their machines in clear view of windows per the original ordinance.

But checking for compliance versus a sting operation are two different animals and take different numbers of officers to accomplish.

“How are these people (who are in glaring violation) getting the OK for gaming?” Hamilton said. “I’m concerned about adding a new ordinance when we’re not enforcing the current one.”

That, Vital said, is one of the problems they have come across.

Educating the gaming proprietors and their employees is now getting more intense with the proposed ordinance.

“In the past we educated the businesses about gambling, telling them they can’t give out money. It has to be novelties (up to $5 worth),” Hebert said. “Then we’ll have them sign an affidavit which will help out in court.”

Vital said a video will be made for educational purposes on who can legally operate the game rooms and 8-liner machines.

Many of the players of the game, Hebert said, are senior citizens who can’t make the trip to Louisiana where gambling is legal. Those people, he added, are very forthright and police have seen these players walk up to the proprietor with a ticket asking to be given their cash prize.

The players, for now, will not be penalized for their participation in illegal gaming.

In addition, there is a plan to add “game room” to the city’s zoning ordinance with an off-street parking requirement of one space for each two gaming machines.

Councilmember Keith Richard recalled the December 2016 bust of an illegal gaming room on West Port Arthur Road in the Port Acres area of town. The initial business was zoned correctly but a residential zoned area was behind the game room.

Richard, who is against all gambling, said this is a concern for the residents who live near or behind such as establishment and he wishes to come up with a way to protect those citizens.

“You cannot absolutely outlaw a commercial business however odious,” senior planner Paul Brown said. While one business may be odious to some it may be acceptable to others and goes back to what makes the U.S. a free country.

Richard said he would like to see the law changed and he suggested for others to contact lawmakers.

The team members and council still have more work to do. Vital is tasked with more research including finding the amount of money collected through fees and fines and where the money goes.