Bad taste in the mouth: Titans end season on sour end to nailbiter 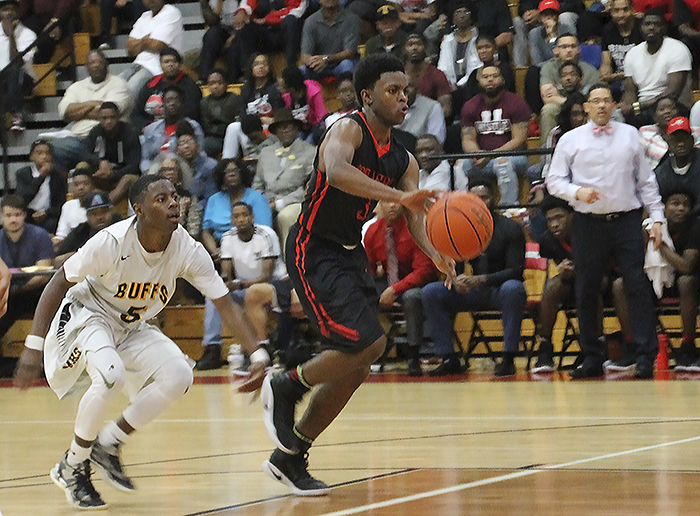 Reao Keller of Memorial makes a no-look pass in the second half against Fort Bend Marshall’s Anthony Norman on Tuesday. (I.C. Murrell/The News)

HOUSTON — The pill was bitter to swallow for those wearing Port Arthur jerseys Tuesday night.

A defensive stop the Memorial Titans thought was clean led to a different outcome. Thailan Wesley tried to change it back in Memorial’s favor, but the iron was unkind.

“Every day, we throw the ball down the floor,” coach Kenneth Coleman said, verbally diagraming the last-second play. Wesley had beaten the Fort Bend Marshall defense in just enough time to catch the long inbound pass and take a clean shot from the left wing.

While the miss might have sealed a 63-62 Marshall victory, it was not the common theme among the Titan faithful. It was a foul call that sent John Walker to the line for two free throws that went all-net with 2.4 seconds left.

Coleman, and the hundreds of fans sitting behind him, thought Tyler Guidry made a clean, vertical defense of Walker’s shot attempt, 10 seconds after Jyson Butler hit a baseline shot to put the Titans in the lead.

A second straight heart-pounding game that saw Butler score in the clutch left many hearts broken behind the benches and others jumping for joy across the court, a perfect example of the emotion of Texas high school basketball. Yet, it was an imperfect example for a town steeped in championship tradition.

“We’ve come a long way,” Coleman said. “We’re still not where we want to be. I came to Port Arthur to win a state championship. Anything short of that, we need to get back to the lab.”

Next season will be the 23rd since a Port Arthur team won a state basketball championship, but this season’s Memorial team went as far as only one other in school history — the regional quarterfinals.

“But we’re going to come back and get it next year,” junior Darion Chatman said Tuesday night.

They’ll have a great opportunity to. Chatman, along with Jomard Valsin, Guidry, Wesley and Butler, are among eight juniors this season who will have Memorial favored to repeat as District 22-5A champion and labeled as a serious threat for the 5A title in 2018. Memorial also finished the varsity season with four sophomores and freshman Nathan Clover.

“We’ve got what it takes,” Valsin said. “We can go far. We can do whatever it takes to get the win.”

That was on both ends of the court. Both teams, though, suffered a high number of fouls after constantly disrupting the other’s offensive rhythm.

“It was big, but you just have to come out the second half and do the same thing,” Valsin said, his Titans leading 29-20 late in the first half. “They hit us with a trap. We worked on that all week, so we should have been able to handle that.”

A 31-23 halftime score turned into 31-29 in less than 2 minutes. But the Buffs never regained the lead until Walker hit a short-range shot with 56 seconds to go.

Then, Guidry scored from the right wing. Then, Dakota Thompson sank two free throws. Then Butler came to the rescue. Then Walker quieted the Memorial crowd with two free throws.

“We should have won that game easily,” Chatman said, ruing that another playoff win was taken away.

The final result only gives the Titans something to build on.