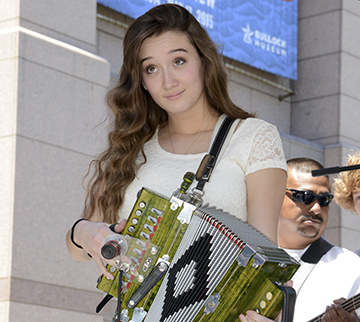 GROVES — Larry’s French Market and Cajun Restaurant will be the backdrop for the 2017 Texas Folklife Big Squeeze Accordion Showcase on Saturday.

Area talent aged 21 and under will be hitting the stage beginning at 3 p.m. at Larry’s, 3701 Pure Atlantic Road.

Some of the local talents that will be at the event include Donovan Bourque, 15, of Beaumont, and Bridget D`Lane Roberts.

Bourque started playing when he was 10 years old. His grandfather was a big influence and left Bourque his accordion when he passed away. He credits musicians Dallas Roy, Andrew Cormier and Steve Riley. Bourque plays with several local Cajun bands, according to Charlie Lockwood, executive director of Texas Folklife.

Roberts has been playing the Cajun accordion for five years. She has had the chance to play in multiple Cajun music bands including Jude Moreau’s group and the group High Performance, he said. She is a participant with Jude Moreau in Texas Folklife’s 2017 Apprenticeship Program, which supports master artists to train apprentices in a variety of folk and traditional arts disciplines across Texas.

“Cajun and zydeco are some of the strongest roots of Texas’ vibrant music heritage,” Lockwood said. “We are thrilled to be back in the Golden Triangle area, searching for young players to help support them and keep this music alive and well. The Big Squeeze program enables Texas Folklife to focus on one of our main priorities and our mission — to help foster the continuation of the traditional arts in he state. In this case it is Cajun and zydeco music featuring the accordion, the ‘national instrument of Texas.”

Up to nine finalists, three from each genre will be selected the week of April 3 by a panel of judges and will perform at the Big Squeeze Concert and Finals at the Bullock Museum on Saturday, April 22. At that time the grand prize winners will be selected.

The three winners will receive a prize package valued at more than $4,000, including a cash prize, a brand new Hohner accordion, performance opportunities with Texas Folklife, publicity, professional development and other professional opportunities.

Those wishing to perform should register online by 2 p.m. or arrive by 2 p.m. on the day of the showcase. Those who cannot attend can mail or email their entries to arrive at Texas Folklife no later than March 31. Complete rules and entry forms are available online at www.texasfolklife.org/bigsqueeze2017 or by calling 512-441-9255.