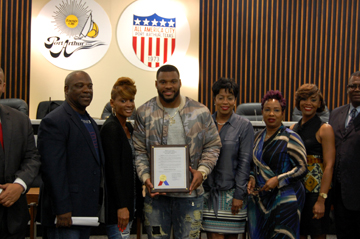 Elandon Roberts, Port Arthur native and Super Bowl champion with the New England Patriots, was honored at the regular meeting of the Port Arthur City Council on Tuesday night.

At Tuesday’s night regular meeting of the Port Arthur City Council it was a case of the more things change, the more they stay the same.

The Port Arthur City Council voted to stay with the current logo and not adopt a proposed new logo or slogan. The vote was 8 to 1 with Mayor Derrick Freeman voting to go with the new logo and slogan.

Tiffany Hamilton, District 2 councilwoman, who proposed the logo and slogan and worked on them, said they wanted to engage the community so they created survey cards. They also had a survey online to provide feedback.

There were 150 participants who voted.

Willie “Bae” Lewis, District 5 councilman, said the survey should had been placed on the May 6 General Election ballot as a referendum.

“I don’t see a need for it (new logo or slogan). The logo we have is not even 10 years old. It replaced the old logo with the port and the palm tree. If it’s not broke, why do we want to fix it?” he said.

Morris Albright III, District 3 councilman, said no funding source has been identified for the slogan and the logo.

Mayor Pro Tem Raymond Scott Jr. said the citizens of Port Arthur’s most important priority are streets and the logo can be saved for the future.

Keith Richard, District 4 councilman, said he hoped there would be more residents to participate on the survey.

He added that residents in his district don’t want the logo and they want streets.

“I’m the voice of my citizens,” Richard said.

Albright said he understood the HOT funds would pay for the city’s decals and such, but the new logos on uniforms would have to come from city department budgets.

Moses said this item has nothing to do with streets and the city council can work on several things at once.

She added that at prior meetings council members said they wanted at least 100 residents to respond to the surveys and they have done so.

City Manager Brian McDougal said city staff has done what the council directed them on the logo and slogan over the year.

“We haven’t identified a funding source for the street program. Every dollar counts,” Albright said.

Hamilton said the logo and slogan has been implemented in phases and a portion of the program has already been budgeted.

“The streets are not part of the resolution,” she said.

Scott said the council hasn’t found a way to fund streets and that is residents’ number one priority.

“Why are we finding another way to fund other things,” he asked.

Lewis said not once was the council told they needed a logo change.

“Five council members could put it on the ballot in May. It is not needed,” he said. “Only staff, some council members and the guy we paid (designer Eric Sullivan) spoke for it. We have better things to do.”

She said to the citizens, their reality is the council is concerned about logos and slogans and not the streets.

“I can’t support this,” Frank said.

Several residents approached the podium to speak out against the logo and slogan.

Albright made a motion to keep the current logo and not add a slogan that passed.