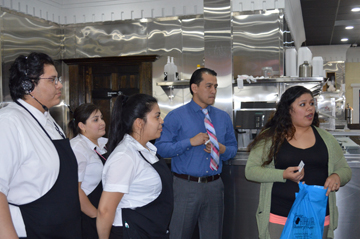 The food at Kimmy’s Café has been described as Mexican-American with a New York style.

The business at 2950 Jimmy Johnson Blvd. in Port Arthur opened last week. Their hours are from 4 a.m. to 10 p.m. on Sunday through Thursday and they’re open 24 hours on Fridays and Saturdays. They also have two drive-thru windows.

On Tuesday, Kimmy’s held a ribbon cutting ceremony with the Greater Port Arthur Chamber of Commerce.

Gerardo Lomelia, manager, said owner Ricardo Ceja wanted to do something a little different than just Mexican food and he came up with the idea of Kimmy’s Cafe. He has owned Tequila’s Restaurants the past 15 years.

One of their specialties is Kimmy’s Club, a sandwich which features ghost pepper cheese.

They also serve ice cream and Mexican fresh waters. They will soon be serving flavored coffees.

A customer saw the ice cream sign on the side of the building and he thought the café only served ice cream, Lomelia said laughing.

He said he wanted to open then restaurant wanted to open sooner, but he was delayed due to waiting on inspections to be completed. The timing of the holidays also held back opening.

If this Kimmy’s Café proves to be successful, Ceja may open another location one day.

“We may not be the biggest restaurant around, but we want to be one of the best,” Lomelia said. “Everything is made fresh.”