In defense of public education at Port Arthur Luncheon 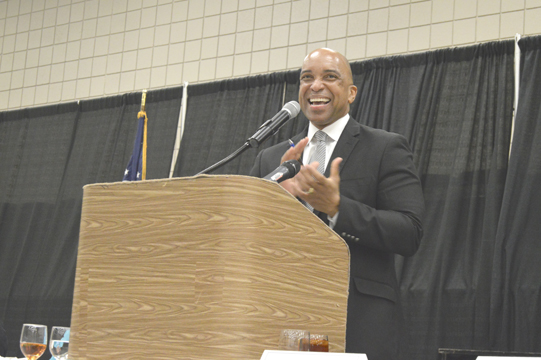 Educators, city officials and those just interested in overall education for the community showed up Tuesday at the Bob Bowers Civic Center to attend the State of Education Luncheon hosted by the Port Arthur Education Foundation and made possible by its numerous sponsors.

Among its keynote speakers, PAISD Superintendent Dr. Mark Porterie gave an impassioned speech concerning the current state of education in the area and the looming prospect of public versus private funding on a state and federal level. 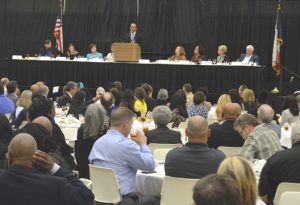 “We all appreciate education. We all believe education is the key to success,” Porterie said.

Porterie said how education was the key to getting out of poverty and to answering every question that a child has.

He also stressed the importance of safety in such bond-marked projects as Memorial High School’s 9th Grade Academy and the groundbreaking for Sam Houston and Travis Elementary Schools.

“They’re done because of safety. We want safety for our children,” he said.

Porterie then raised the questions of what quality education and equity meant in the context of current political and social climates.

“I am not opposed to school choice,” Porterie said before repeating himself for emphasis. “I feel every parent has to make a choice of where their child goes to get an education.

“What I do have a problem with is taking money from the public sector and putting it into the private sphere.”

Porterie referred to current talks in federal government to defund public education and to then invest it into the private sector such as charter schools.

Porterie highlighted local efforts to educate children who do not speak English in order to give them a better chance at receiving a quality education and doing well in school.

He credited such people in the local effort as Elizabeth Cravens for training and encouraging children to do their best.

In addition, he remarked how the work ethic of current children has lagged behind that of preceding generations.

“We believe everyone needs to work. … We teach our children to go to work. They are entitled to nothing,” he said.

In support of his stance, Porterie pointed out a PAISD instructor in the crowd who works with special needs kids. The instructor suffers from a hearing impairment.

Porterie said the instructor could have taken the easy way out, chosen not to work and instead receive disability checks from the government; he did not.

“He said, ‘I don’t want that check; I want to work.’ He works with special needs children.”

Porterie returned to the topic of public versus private funding in education.

“When you talk about charter schools and private education, I ask, ‘How will it work for the Port Arthur School District for brown and black children?”

Porterie conceded that charter schools might accept children of minorities, children with disabilities and children who come from poverty; however, he then asked,

“Will they keep them? Or will they send them back to PAISD?”

Porterie said they would take and keep all children, whether they’re homeless, pregnant or disabled.

“We work with the children,” Porterie said. “Don’t take funds from a struggling district. Work with us.”

Porterie asked how the ratio of public and private funding could be balanced. One of the ways, he argued, was through meeting and working with the community and its parents.

Porterie said he has been working since he was 12 and how he was not given anything. It was indicative of his generation.

“We turned out okay,” he said. “Today, children are rude. They have no work ethic. Everyone feels their child should be given everything.”

He made notable exception, however, of the PAISD students who were in attendance with them. “They’re good. We choose the best ones to represent us here” he said with a laugh.

Still, Porterie did not lay the blame solely on the current generation.

“We failed our children. We allowed the government to tell us what to do — that screwed us up.”

Porterie said PAISD is in great shape and they’re only going to get better.

“We have no choice but to get better.”

Porterie asked what might become of public education if all the better teachers and staff are lured away. What if they go to a fully funded private sphere? What might become of the students who would depend on such public funding?

He implied that a hard choice would have to be faced as a result. 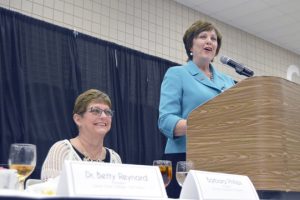 It is a member of the Texas State University System; it caters to the three surrounding counties; it has 29 buildings on campus; and is approximately 135,00 square feet in scope.

“Affordable, accessible quality education is provided for students in this area,” Reynard said.

She also said that LSC-PA is one of the top 150 two-year colleges in the United States as rated by the Aspen Institute.

In dual credit courses, there are 527 new enrollments by students looking to take college loan courses. As for Early College High School, created in association with PAISD, Reynard said its first year was going well.

100 students are currently enrolled and the program can accommodate up to 400 students, which Reynard said she and the school were hoping to reach one day.

Reynard also made mention of their Second Chance Project where Pell grants are awarded to inmates looking to further their own education.

Fellow keynote speaker and Principal of Sabine Pass ISD Andy Bates said how their AP program was ranked as one of the top school AP programs for providing college credits.

“We’re in the top 400 schools in the U.S. and Canada, and there are only 20 schools recognized for it in Texas,” Bates said.

He emphasized the importance of extracurricular activities in schools and how they could greatly affect the success chances for students.

As an example, Bates cited a longitudinal study that said two-thirds of extracurricular participants were expected to complete at least a Bachelor’s degree after high school.

Bates said a vital part of making those activities a success was to invest in likeminded coaches and teachers who care enough about their students to allow them to succeed.