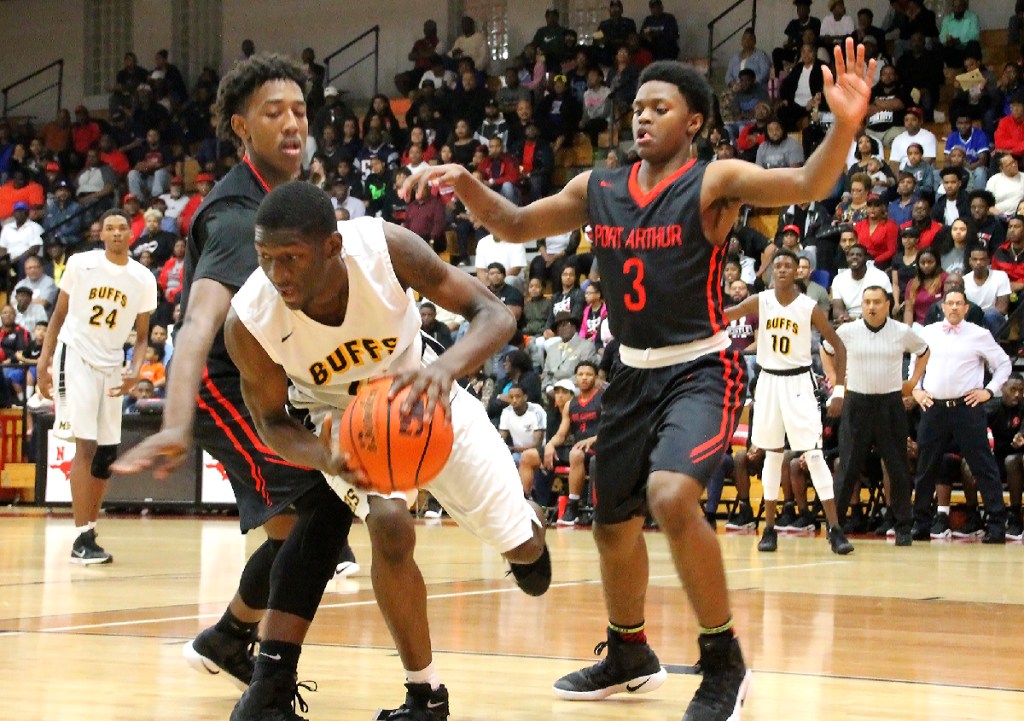 HOUSTON — Jyson Butler once again played hero for Port Arthur Memorial … but only for a moment.

Fort Bend Marshall center John Walker drew a foul with 2.4 seconds left, and he took the role of savior away. Although the call didn’t make sense to Memorial coach Kenneth Coleman.

“That was a tough call right there at the end,” Coleman said. “Tyler [Guidry, who was called for the foul] was in position. You’re talking about two seconds. He got his hands up; you know what I’m saying? In a game like this here, to put him at the line with two seconds left … but that’s the way it goes.”

With the Memorial crowd to his right trying its best to distract, Walker, a 6-foot-9 Duquesne signee, coolly made both free throws, and the 10th-ranked Buffalos held on to win 63-62 Tuesday in the 5A Region III quarterfinal at North Shore High School.

The 15th-ranked Titans (27-6) quickly threw a long ball to Thailan Wesley, but the junior’s 12-footer from inside the left wing drew iron, and the Buffs (30-7) managed to save a loose ball as the final horn sounded.

Next for Marshall is Waco University in the regional semifinals Friday at Delmar Fieldhouse.

The Titans are left just one basket away from making their longest playoff run since Memorial was established 15 years ago. They seemed in control late in the first half, leading by as much as 29-20.

Then, the second half happened.

The Buffs jumped out to a 6-0 run, keyed by back-to-back Taj Sherman baskets. Memorial built the lead back to as much as 39-32 and stayed cool at the line in its own right in the process. The Titans made their first 19 free throws, but missed 2 of 3 in the final 3 minutes.

Both teams were successful at disrupting each other out of their half-court and transition games in the first half, but Marshall also struggled to convert short-range shots when it had a chance early on.

Memorial can be charged with throwing Marshall off near the basket at times. Freshman Nathan Clover came off the bench to lead a block party for the Titans with back-to-back rejections.

Walker had only eight points, but his last four were crucial. He put back a missed jumper with 56 seconds left to give the Buffs the lead, but coming out of a timeout, Tyler Guidry responded for the Titans with a shot from the right wing. He finished with a team-high 12 points.

Dakota Thompson was fouled with 24.6 seconds left and made both free throws to make it a 61-60 Marshall game. Out of another timeout, Jomard Valsin pushed the ball up the court and found Butler on the left-hand side.

Bishop James scored 11, and Reao Keller and Valsin each scored nine for the Titans. Wesley, the Titans’ leading scorer on the season, was held to two points, while Chatman totaled six.

See Thursday’s issue for more reactions from the game.