No injuries after fire at Port of PA 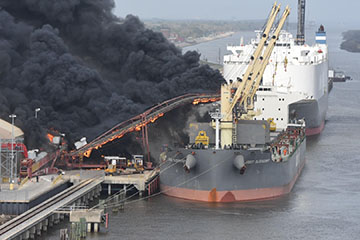 A view of a fire at the docks at the Port of Port Arthur. Courtesy of Cody Sewell

A fire broke out at the Port of Port Arthur at around 3 p.m. Monday.

No injuries were reported. The fire started on a conveyer belt that was loading wooden pellets onto a ship.

The incident happened at Jobst Oldendorff, a bulk carrier vessel, while loading from a German Pellets silo at the port.

Floyd Gaspard, executive port director, said the ship was loading wooden pellets by conveyer system onto the ship when the fire occurred on the conveyer belt bringing the burning pellets onto the ship’s cargo hold. About 8,000 tons of pellets were being moved.

“Port Arthur Fire Department responded very quickly and had it under control as fast as anybody could have and the fire stayed fully contained,” Gaspard said.

Fire watchers with both the Port of Port Arthur and the fire department will be on duty around the clock keeping an eye on the situation.

“There were no injuries n the ship or on the ground. We’re very fortunate,” he said. “This was handled professionally by Port Arthur Fire Department and we commend them and Chief Larry Richard on a job well done.”

Billowing black smoke was visible at the start of the fire and later, when the fire was extinguished the crumbled conveyer system could be seen from across the ship channel on Pleasure Island.

Jeff Patton was on his golf cart on the north end of Pleasure Island when he saw the smoke. Patton’s father was a Port Arthur firefighter and Patton himself was a volunteer firefighter for Nederland.

“I saw light colored smoke from the marsh fire the other day and knew this was different,” Patton said as he watched from across the waterway. “I know how to read a fire and this was black smoke.”

Risa Carpenter, public information officer for Port Arthur, said the fire was under control around 5 p.m.

Gaspard said there was minimal damage to the port property and that the damaged will be assessed in the next few days.