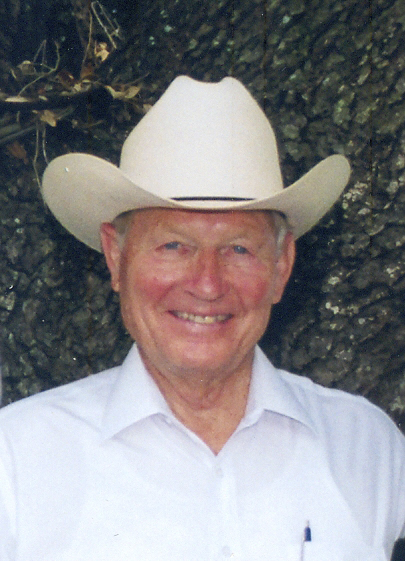 Joel Levingston, rancher, funeral director, husband and father, and most important to him grandfather, died on Sunday afternoon.

Joel was a native of this area his entire life, except for time in college and the military. He was a graduate of Thomas Jefferson High School and attended Landig Mortuary College in Houston where he received his degree in Mortuary Science. He held both a Texas Funeral Director’s and Texas Embalmer’s license. Joel served in the United States Army during the Korean Conflict as head of a Graves Registration Lab.

He established Levingston Funeral Home upon his return in 1955. Joel dedicated his life to funeral service. By the age of nine he was washing cars for a local funeral home.

That same year he married Portia Smith – who he had dated since she was 15 years old.

Together they built Levingston Funeral Home into one of the most successful in the state. Today his children, Kathy and Jay Levingston run the business.

He was named by Groves Jaycees as “Business Person of the Year” twice, Funeral director of the year by Texas Funeral Director’s Association- and too many awards to mention.

He was a lifelong Boy Scout. He earned the rank of Eagle Scout, served as Scoutmaster in Groves and formed Sea Scout Ship #501. He received the Silver Beaver Award, highest honor in scouting.

Joel served as Groves Civil Defense Director for many years following the loss of their first funeral home to the tornado that struck Groves in 1957.  At one time he served as Emergency Management Director over the entire Gulf Coast.

Joel was a member of Tejas Vacqueros and a lifetime member of the Houston Livestock Show and Rodeo and served on the Breeder’s Greeters Committee.

Joel was appointed to the State and National D-Mort Teams. He was activated during 9/11 attacks and served in New York City.

Funeral services will be held at 10 a.m., Thursday, March 2, 2017 at Levingston Funeral Home in Groves with a military graveside to follow in Greenlawn Memorial Park.

A visitation for family and friends will be Wednesday evening from 5:00 to 8:00 p.m. at the funeral home.

Joel dedicated his life to serving others. Those that knew him know he did just that.