Celebrating from all over with Port Arthur Mardi Gras 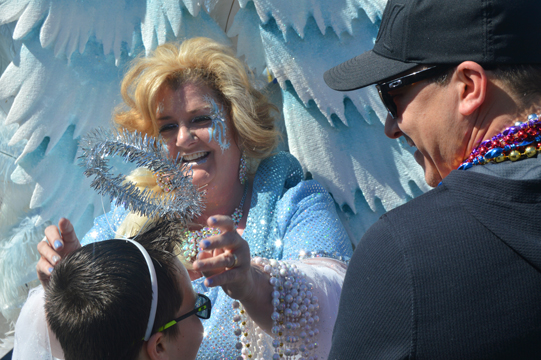 “Angel of the Heavens” Jerrilynn Miiler bestows a halo upon a boy at the Krewes Royalty March. (Lorenzo Salinas/The News)

People came from areas near, far and probably from somewhere in between to enjoy the 25th Annual Mardi Gras Southeast Texas celebrations Saturday in Port Arthur. 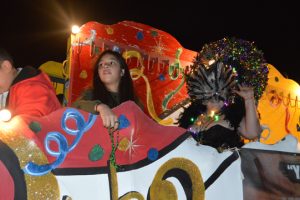 Riders on one of the many floats gaze out at Mardi Gras PA 2017. (Lorenzo Salinas/The News)

Parades for the day included the Krewes Royalty March, the Motorcycle Showcase Parade and the Total Krewe of Aurora Grand Parade. All were held downtown where the crowd was lively and came from more places than just Port Arthur. 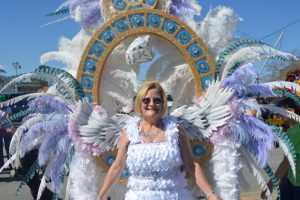 Lisa Norris had made the trip from Louisiana while Brooke Hawkins had come down from Buna.

“We’re here for the parades and the foods,” Norris said, who had been attending the event for five years now. “I love it.” 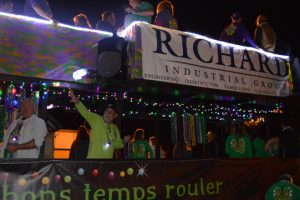 The Richard Industrial Group passes by with a festive gathering on its float. (Lorenzo Salinas/The News)

Hawkins said she had been attending the parades a few times now, but it was the food that kept bringing her out here.

Norris said her favorite food at the event was funnel cake.

When asked the secret for collecting a lot of beads, Norris laughed.

“Hold your kid in front of you for beads,” she said. 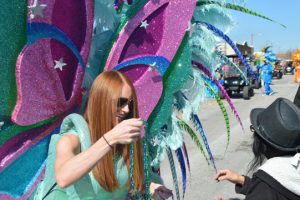 Dressed out in bright purple, gold and green, Deanna Barrow already had the look of a veteran Mardi Gras attendee.

“It’s my third year here,” she said. “I love to see their dresses.”

Barrow was referring to the beautifully dressed Majestic Krewe Royalty.

“I come here to see the parades and to have the grandkids ride the rides,” she said. 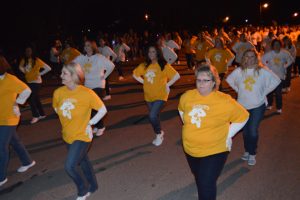 Wyndal Odom, his wife and grandchildren had come from Orange to view the festivities.

“I’m here because of my grandchildren. They live in Lumberton and the father is working and the mother is (busy), so we figured we’d take them to Mardi Gras,” Odom said.

Odom, who was a Mardi Gras first-timer, seemed to be enjoying himself and the favorable weather.

“The weather’s great, and the kids are loving the rides. There’s a diversity for all levels.” 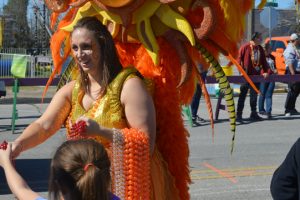 “Empress of the Sun” Leslie Ruiz hands out beads to the crowd. (Lorenzo Salinas/The News)

Connie Swope came from Orange and had brought her family with her.

“This is just from the first day,” she said, gesturing to her large collection of beads that her and her family were wearing. 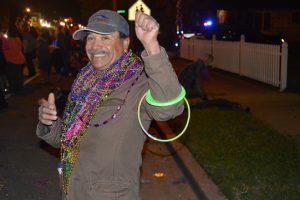 A happy onlooker who had collected many beads during the parade. (Lorenzo Salinas/The News)

“Waving is the secret, and getting in front of people.” Although she was quick to add that no pushing was allowed in the pursuit of such treasures.

Wayne Merendino had been coming to Mardi Gras Port Arthur for 15 years.

“It’s the rides, the atmosphere, the food and the beads,” he said when asked what had brought him for so long.

As for general advice for enjoying oneself at the festive event, Merendino smiled.

“Just to relax and let go. Have some fun.”

Blake Adams was from the area and had brought his family out to have fun, too.

“We bring the kids out to have some fun and to have a good time,” he said.

Adams said the kids liked the rides and the beads while he enjoyed the cold beer.

“It’s just about getting out and having some fun.” 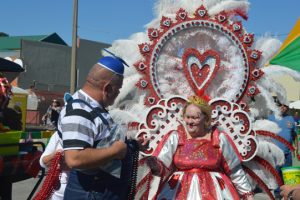 Doris and Dick Lasseigne were both attendees and volunteers, as the couple was part of the Port Arthur Sertoma Club.

The Lasseignes had been coming to Mardi Gras since it had began 25 years ago.

“Our club was one of the founding organizations that started Mardi Gras,” Dick said. 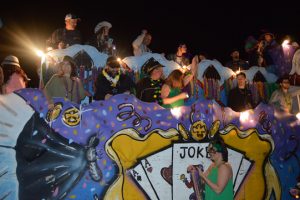 One of the colorfully decorated floats going down Procter. (Lorenzo Salinas/The News)

As such, they both seemed to take a bit of pride in their work and in their festivities. Both were adorned with a generous serving of beads and colors.

“The weather is good,” Doris said. “I think everyone looks forward to it.” 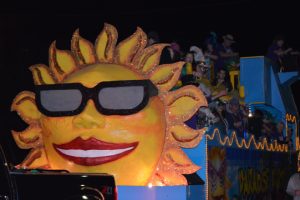