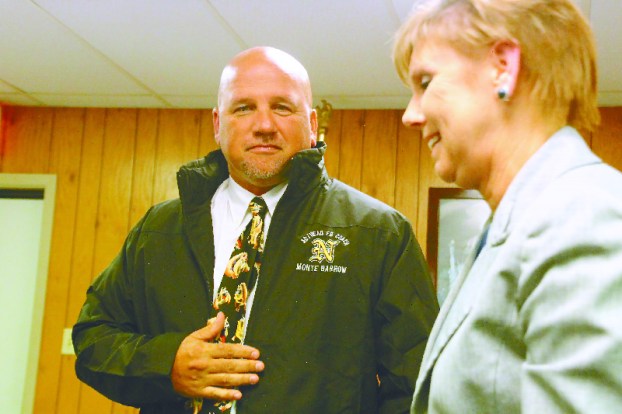 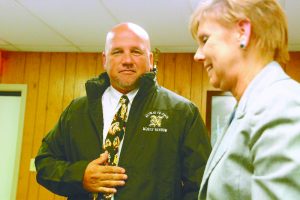 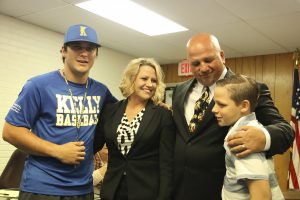 NEDERLAND — The Nederland Independent School District board of trustees needed only a half-hour to approve its next head football coach and athletic director.

And they only needed to look within the program for the hire, too.

Monte Barrow, a 1986 Nederland High graduate who has spent his entire career on Larry Neumann’s coaching staffs at the school, was elevated to the joint position Monday. The longtime offensive coordinator has been on the staff since Neumann, who retired Jan. 31, was first hired in 1993.

“Being a Bulldog your entire life, this isn’t just something that had just come up in my thought process of where I wanted to be in my career,” the 49-year-old Barrow said. “I don’t think this is necessarily a career move, but just an opportunity to lead a program, a school and community that’s been special to me my entire life, and I can’t think of a place I’d rather be right now.”

Shortly after the board’s closed session, Barrow walked into the boardroom in a black suit and tie with his wife Amber and two sons, 22-year-old Seth and 12-year-old Reeve. During a speech, Barrow was overcome with emotion when he acknowledged his father among a standing room-only crowd inside the boardroom.

“He’s the biggest Bulldog fan I know,” Barrow said. “I know a lot of people will attest to that. He’s always been my biggest fan, but I’m definitely his. I just want to thank him, and all my friends here who have supported me throughout this process.”

“I know the names that applied for this job,” Barrow said. “So, that in itself — I wouldn’t say I was uneasy — but I knew there were guys that were qualified to be in this role. I never thought of it as, ‘This is my job because I was already here.’”

NISD Superintendent Robin Perez said Barrow’s long tenure in the district wasn’t a factor in the board’s decision, but the search committee was “very objective” in its process.

“During the interview process, we were always impressed with him,” she said. “He was always at the top of the interview list in the process. He is dedicated to our kids. He has their best interests at heart. His work ethic, just bringing the team together, what he talked about in the interview process about the whole athletic department and bringing everybody together for the benefit of the students, sharing the students with different sports and with FFA [Future Farmers of America] and different things we have within our district, he was always [in high consideration] from the committee.”

Barrow has organized a number of outstanding Bulldog offenses since he first became a coordinator in 1999. The Bulldogs have made the University Interscholastic League playoffs 16 of the past 18 seasons and made it to the state semifinal round in 2001.

For running backs coach Michael Broussard, Barrow’s promotion is a sign of continuity within the program.

“Just continuing the program we’re already running, it’ll be easier on the kids and the coaching staff, as well as the community,” Broussard said. “Nobody has to start over.”

Barrow’s 2015 offense, which helped the Bulldogs win their fifth straight District 22-5A championship, went for nearly 373 yards of total offense through the regular season to rank among the top half of the teams in the district and was led in part by Lamar signee Austin Krautz. Mitchell LeBaron threw for 1,503 yards and 17 touchdowns that regular season.

Nederland finished 4-6 in 2016 and missed the playoffs by one game while dealing with a number of injuries in key positions, but Barrow is looking forward to righting the ship — while following up a man considered a coaching icon in Southeast Texas.

“Being with [Neumann] for 24 years, I know what size shoe he wears,” Barrow said. “It’s not the same size I wear. So, I don’t have to worry about trying to fill those shoes. I’ve got to be the best me I can be for the good of this program, and of course, what comes first is our student-athletes.”

Mark Robinson didn’t have to sweat out the final minutes before the deadline to report back to the dock. He... read more