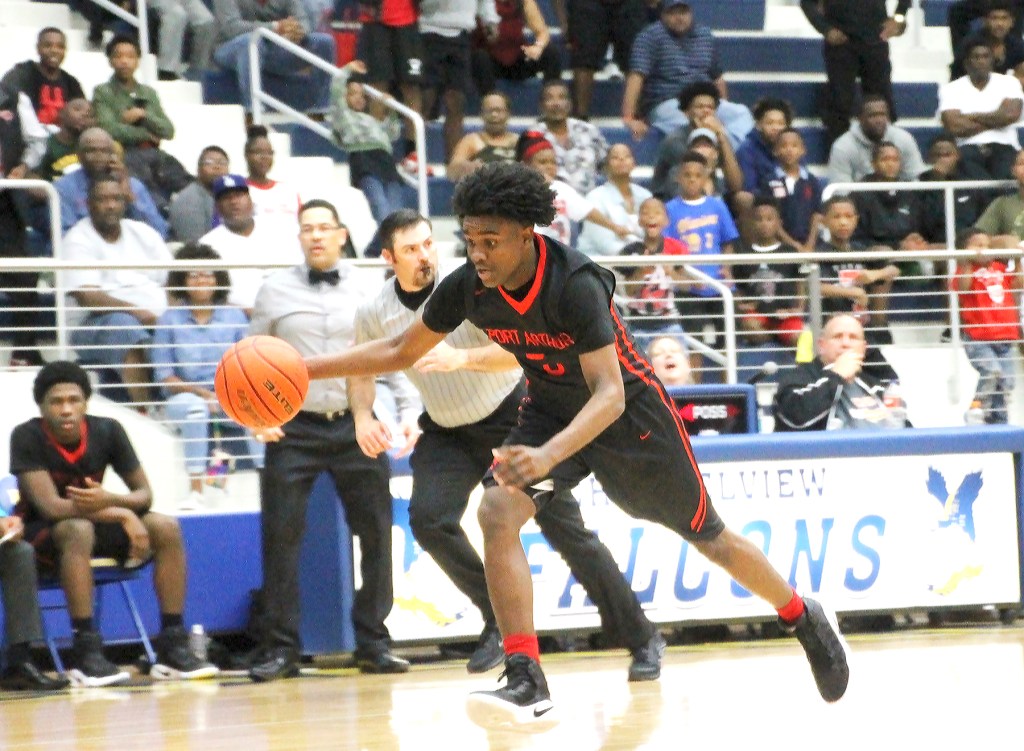 Jyson Butler of Memorial comes up with a loose ball and drives to the basket in the second overtime against Texas City on Friday in Channelview. (I.C. Murrell/The News)

**CORRECTED to reflect the regional quarterfinals as the upcoming round**

CHANNELVIEW — Port Arthur Memorial junior Jyson Butler showed a calm demeanor on his face right after Jeremiah Hernandez scored off an inbound pass to put Texas City ahead 61-58 late in the first overtime.

Darion Chatman brought the ball up and found Butler open on the left wing for a three-point basket with 1.8 seconds left. That gave 15th-ranked Memorial just the second — or third — wind needed to dodge 11th-ranked Texas City 68-64 in the 5A area round.

Butler, a guard, scored eight of his 12 points in the two overtimes.

Memorial (27-5) will play No. 10 Fort Bend Marshall on Tuesday in the regional quarterfinals. The time and place for that game was not immediately determined.

Still, the Titans have taken two steps closer to coach Kenneth Coleman’s dream of bringing a state championship back to Port Arthur. Lincoln won the city’s most recent title in 1995 with future NBA star Stephen Jackson.

The Titans were buoyed in part by the Stingarees’ meltdown at the free-throw line in the fourth quarter. TC (24-9) missed six straight foul shots then and hit 6 of 10 in the two overtimes.

Junior Thailan Wesley, who had struggled with his outside shooting for much of the game, hit a big trey at the 2:43 mark of the fourth period to put the Titans up 50-47, after they trailed by as much as 24-16. It was his second of two makes from the arc, and he led the Titans with 23 points.

Chatman, who went scoreless in the first half, had 17. He attacked the basket with 47 seconds left in regulation to give the Titans a 53-51 left, but TC’s Michael Walker rebounded a blocked layup and made a putback 15 seconds later to tie it at 53.

Wesley had two chances to win it before the buzzer, but a three-ball and ensuing floater would not go.

After Chatman spun to the rack to even the score at 56, Memorial answered a pair of TC baskets in the final 51 seconds of the first overtime to stay alive, including a Johan Rodriguez trey that gave the Stings a 59-56 lead. Butler cut the deficit to one with a layup, and Hernandez’s bucket off an inbound pass came with 10 seconds to go.

TC called timeout after Butler’s game-saving trey, and Rodriguez’s full-court heave was well off the mark to bring up double OT.

Butler picked up a loose ball and cruised to the basket uncontested to resume the scoring. He added two more off a rebound with 1:57 to go to give the Titans a 66-62 advantage.

A minute after TC sank a pair of bonus shots, freshman Nathan Clover rejected Hernandez on a putback attempt. A second try by Hernandez rimmed out, and Butler made 1 of 2 free throws.

Following a timeout with 10.9 seconds left, Rodriguez drew iron on a slightly off-balance trey, and Chatman made 1 of 2 at the line to seal a game that had reached halftime 33 minutes after tipoff.

Adrian Sherwood led TC with 18 points. Michael Walker added 10, including a running three-pointer from NBA range at the first-half buzzer to give the Stings a 29-22 lead.