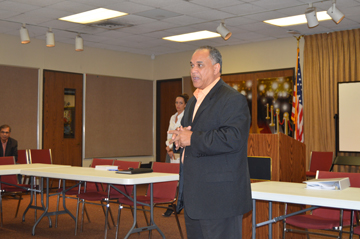 Keith Richard, District 4 councilman, held a community meeting on Thursday night at the Port Arthur Public Library to hear from the citizens.

On Thursday night at the Port Arthur Public Library, the residents at District 4 Councilman Keith Richard’s community meeting were also interested in streets and security with one addition — their displeasure at the new city logo campaign.

Most asked why the city would spend the time and money on the new logo when there are so many other problems in Port Arthur.

“If council worked with the same emphasis on other problems as they have with this, things could get done,” said resident Gloria Sanchez.

Richard said the money for the logo is coming from the Hotel Occupancy Tax fund. Sanchez said the HOT money should be used to refurbish Rose Hill Manor instead.

Richard started the meeting by saying he holds his monthly meetings because he wants to be transparent as a councilman.

“The city has gotten better,” he said. “We work together. We can disagree, but we do it professionally. We can work together to move the city forward.”

“On the council they want you to choose a side. I want to do what’s right for the citizens. We have problems, but how can we work together to resolve them?”

The discussion next turned to sanctuary cities.

Resident David Jones asked if it could be clarified what a sanctuary city is.

Det. Elie Van Horn with the Port Arthur Police Department said they have had a policy on undocumented workers for a long time. Chief Patrick Melvin recently publicized the policy to remind everyone and that there’s been no changes.

However, he added if a crime is so serious a factor, immigration status information will be passed along to a federal agent.

“We want residents to know it’s safe to report a crime and not get hauled off and detained,” Carpenter said.

Some residents asked about long response times on police calls.

Sgt. Amall Bodden of the PAPD said that Port Acres is their largest patrol area that also includes patrolling stores such as Walmart and Lowe’s.

Others voiced how juvenile crimes were affecting them. It was suggested curfew enforcement, calling Child Protective Services and the new Explorer program for youths interested in becoming either a police officer, a firefighter, or an EMT may help.

Richard said those programs could help those youths and the Explorer program trains students so they’re ready if they decide to enter an academy.

Lastly, Armando Gutierrez, public works director, said nearly half the streets in Port Arthur are either in poor of failed condition.

He said it’s time for the city to accept a plan and make a commitment.

He gave as an example asphalt streets that start to dehydrate and crack. Moreover, the foundation starts to move and the street fails.

Gutierrez would like to stop the leaks, make a good repair, and the cost of maintenance will drop dramatically. He also compiled an inventory of every street in the city and ranked them on a scale of one to 10.

“It’s maintenance rather than repair,” he said.

Lewis said the city will need a bond issue of at least $50 million to $60 million to have all the streets fixed in a timely manner rather than spending $14 million a year and taking 20 years to complete.

He added that there should be more revenue flowing to the city’s coffers now the water department and the transit department no longer need to be subsidized. Additionally, Cheniere Energy in Louisiana will be buying $12 million worth of water yearly from the city for their plant that will service the debt on a street bond.

Thirdly, the city can save by teaming up with Jefferson County Precinct 3 road crews and cut costs in street construction.

Richard said he favors getting started on the streets now and work out the bond later. He also wants the refineries and plants to start paying their full tax that would bring in $25 million to $30 million a year.

Sanchez asked why is everyone so afraid to ask the refineries to do this since they’re not going anywhere.

“Our city should be beautiful,” she said.

Richard said that is why residents need to come to city council meetings, let their voices be heard and to get involved.

One resident asked about the dumping of tires in the city.

Richard said there’s only so much the city workers can do and if the citizens don’t want to get involved and clean it up, Port Arthur will continue to look like a third world country.

He cited as an example of code enforcement in Nederland that Port Arthur could use where residents first receive a warning, then a citation, and finally they must appear in court.

“We need to hold the tire shops accountable. There’s not that many citizens who are dumping that many tires,” Richard said.

When the saints come marching in