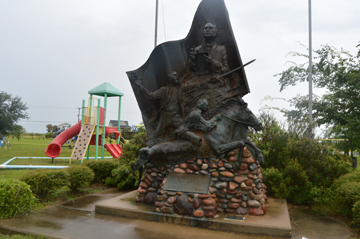 A statue of Sam Houston.

SABINE PASS — Sabine Pass was one of the first settlements in Mid or South-County, dating back to when Texas was part of Mexico and Founding Father Sam Houston played a part in its development.

Sam Monroe, president of the Port Arthur Historical Society, explained that Houston subdivided lots in what was then known as Sabine City. In fact, he named the streets after his mother, Andrew Jackson, and others he had much respect for.

Houston thought Sabine City would one day rival Galveston as a prominent port. He had a home at Smith Point and he saw much potential for the Gulf Coast.

When Houston was in the Senate, he wrote legislation to get a lighthouse built on the Louisiana side of the channel and he also helped get the Intracoastal Waterway built.

Monroe said the Intracoastal Waterway is important for shippers because they can travel inland rather than on the open seas.

“Sam Houston had a significant impact on Jefferson County and the Gulf Coast and nobody knows about it,” Monroe said. “We have a document at the museum (of the Gulf Coast) about Sabine City.”

There have been efforts to recognize Houston, however. A statue of Houston was unveiled 20 years ago and Sam Houston IV attended the event to represent the family.

The text for a 1989 Texas Historical Commission marker reads as follows:

The first known settlers in this area were John McGaffey and Thomas Courts who arrived in 1832.

Houston was active in promoting the sale of 2,060 town lots. The city soon flourished. Houston and his partners lost title to the town when the General Land Office determined that John McGaffey held original claim to the lands.

The city of Sabine developed into a major port. In 1860 the state legislature, in approving a new charter for the city, changed the name to Sabine Pass.

It was the scene of a major civil war engagement in 1863 with Confederate forces preventing a Union attempt to capture the port and gain major inroads into Texas.

The federal Harbor Act of 1882 led to construction of jetties and development of inland ports along the Neches and Sabine Rivers.

By the early 20th century Sabine Pass began to decline due to hurricane damage which prevented railway maintenance.