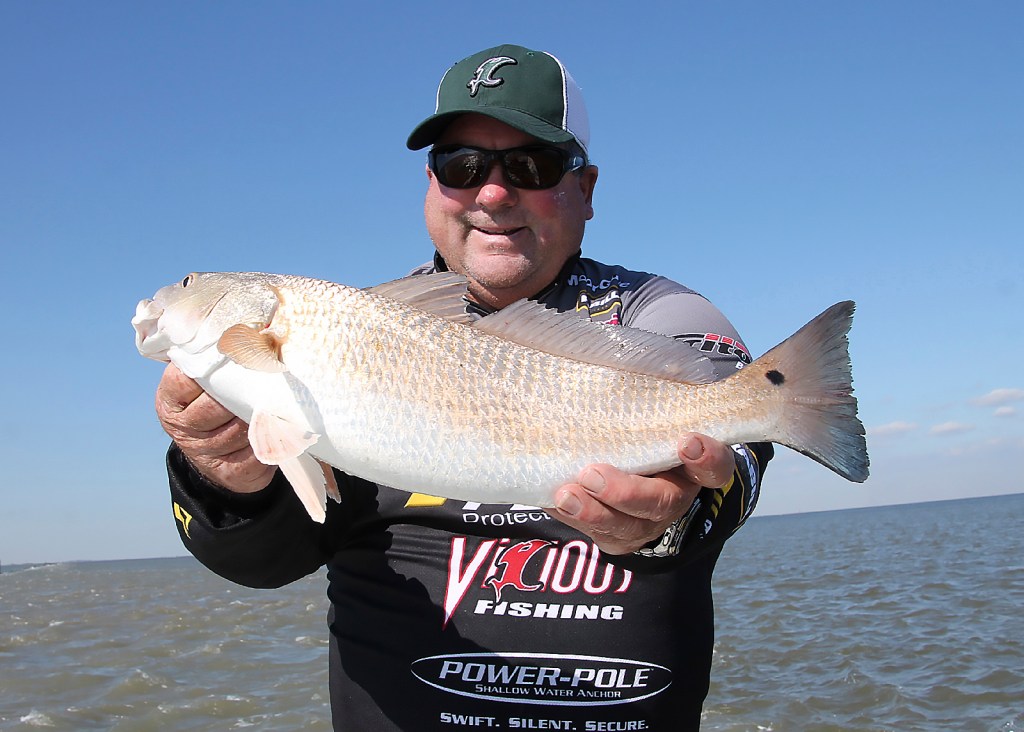 Mike Frenette of New Orleans holds up a redfish he caught on Sabine Lake on Wednesday. (I.C. Murrell/The News)

On the Tuesday before Fat Tuesday, the former Jefferson Parish Sheriff’s officer had a field day out on Sabine Lake by catching 30 fish. Of course, he couldn’t keep them all, and only one of them was of tournament-legal length.

“I caught about a half-dozen sheephead on crank baits, which was a bit unusual,” Frenette, 60, said. “Usually, they want shrimp or crab legs.”

Frenette wasn’t on the hunt for the small, stripy fish resembling a zebra pattern. He’s been testing the water for the much-longer redfish that’s prevalent in Sabine Lake.

Still, he had fun finding them near the jetties.

“I was using red-eye shad from Strike King,” Frenette said. “The tide was moving pretty good, and the fish were cooperating.”

Thirty anglers including Frenette will try to rope in their biggest allowable redfish Friday through Sunday, aiming for the top $75,000 prize package in the Elite Redfish Series Classic Kickoff. The tournament is the signature event on the series, and although it’s a non-points event, anglers had to qualify to make it.

“Like the Masters, Daytona 500 and Bassmaster [Classic], we begin our season with our biggest event of the season,” Elite Redfish Series founder and host Pat Malone said in an email.

Maybe it’s only appropriate the Classic Kickoff winds up on the same day the Daytona 500, NASCAR’s premier race, will be run.

The Classic Kickoff is being held in conjunction with Mardi Gras of Southeast Texas. Weigh-ins will be held at 4 p.m. Friday, Saturday and Sunday at the Mardi Gras’ Elite Stage on the 800 block of Procter Street.

But the action will be hot and heavy on Sabine Lake, and Frenette, who competed in last April’s Challenge on the Coast here, is expecting the water conditions to be a lot tougher than in recent days.

“Last year on the second day, I couldn’t fish out here. It was too rough, and I had to turn around,” said Frenette, a Nicholls State graduate who owns the Redfish Lodge of Louisiana in Venice.

“It was a safety factor,” he added. “On a day like [Tuesday], you can get a false sense of security because it’s so beautiful out here, but the winds are supposed to be 16 to 18 miles and hour starting Thursday and Friday, and that’s going to change everything up.”

Gusts will reach as high as 25 mph on Sunday with a 20 percent chance of showers, according to the National Weather Service.

The prize package includes a 22-foot Yellowfin bay boat and tandem axle custom aluminum Ameritrail trailer. It’s a nice grand prix for a tournament that has challenging limits on the redfish that can be caught.

“Redfish are not necessarily tougher [than bass], but redfish have a slot limit,” Malone said. “They have to be at least 20 inches long and can’t be over 28 inches long, where with bass, once they go over 12 or 14 inches, you can bring in as big of fish as you want to. With redfish, if it’s over 28 inches, you have to throw it back, so sometimes, the fish of a lifetime is ‘too’ big with a redfish and that makes it very challenging.”

“The attraction to Sabine is the community,” Malone said. “From the folks at tourism, city officials including Mayor [Derrick] Freeman, to the friends made at local businesses, we have spent a lot of time in this area, and the locals have really made the tour, its anglers and their families, friends and fans of redfishing feel … welcome!

“And that’s a very big deal to us. Oh, yeah, the fishing and the food … is among the best anywhere.”

The Classic Kickoff will air later this year on Destination America, with airdates to be announced.