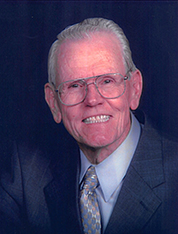 Louis David (L. D.) Young, Jr., went to his heavenly home on February 22, 2017 at 93 years of age. L. D. was preceded in death by his parents Florence and Louis and sister Naomi Miller.

L.D. was born on May 13, 1923, in Forest Hill, Louisiana where he spent most of his youth. After graduation from Forest Hill High School, he enlisted in the Navy and served in several ports during World War II including the Solomon Islands, China, and Japan.

In 1941 L. D. began what would become a 42-year career with Texaco. His career was briefly interrupted by the war when in 1943 L. D. enlisted in the U. S. Naval Service. After the war ended, L. D. married Joyce Duplissey on September 7, 1946 and moved to Young Drive in Bridge City where Joy and L. D. began their family of five daughters and one son. L. D. continued his work as a laboratory technician at Texaco retiring in 1982.

L.D. was a member of First Baptist Church for 60+ years and served as a Deacon for over 30 years. Joy and L. D. worked with their church to start what later became known as Second Baptist Church in Bridge City. They taught their grandchildren the value of serving the Lord by taking them down to the Texas valley during summer vacations to help construct church missions. In retirement, Joy and L. D. worked as seasonal employees in Yellowstone National Park for 16 years. He enjoyed gardening, traveling, visiting with friends and neighbors, volunteering at church.

Funeral services will be held at 10:00 a.m., Saturday, February 25, 2017, at First Baptist Church in Bridge City with Reverend Bob Boone officiating. Burial will follow at Hillcrest Memorial Gardens in Orange. Services are under the direction of Claybar Funeral Home.

In lieu of flowers, memorial contributions can be made to First Baptist Church at 200 W. Round Bunch Rd, Bridge City, TX 77611 or to Yellowstone Forever at www. Yellowstone.org/donate.