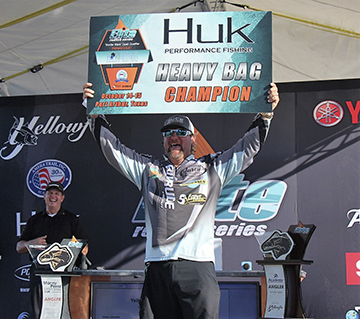 The Elite Redfish Series Classic Kickoff is coming to Port Arthur just in time for some revelry.

The professional fishing tournament is the newest edition to Mardi Gras of Southeast Texas.

Partygoers have a chance to watch live weigh-ins with host Pat Malone within the festival grounds.

Elite weigh-ins will be filmed to air on Destination American TV.

Professional angler Brian “Freddy” Frederick of Port Neches will be taking part in the tournament. Last year he was named Rookie of the Year.

Malone is excited to be back in Port Arthur for Mardi Gras.

“We are thrilled to be a part of the greatest fishing community on the Gulf Coast, big Sabine redfish and local food that is among the best we’ve ever had, Pat Malone of Elite Redfish said. It is normal for coastal communities to offer their fare of seafood but when we hit Port Arthur and realized we were in Cajun country, our mouths watered up like the shores of Lake Sabine. We love being in Port Arthur and can’t wait to put on a head turning show for the community this Friday, Saturday and Sunday at the Mardi Gras festival.”

Boats will launch from the Pleasure Island RV Park at 7 a.m. Friday through Sunday. The public is welcome to watch.

Weigh-ins will happen daily at the Elite Stage, 800 block of Procter Street at 4 p.m. before each night’s parade, according to information from Elite. After the top five anglers have been determined on Saturday, the top five will participate in the Krewe of Aurora grand parade. Dodge trucks will pull Skeeter boats and the top five will ride and throw beads.

Those top five will then compete on Sunday for the grand prize. The total purse is more than $100,000 in cash and prizes with the grand prize package of $75,000 including a 22-foot Yellowfin bay boat powered by a Yamaha 5H00 250 HP motor and tandem axil custom aluminum Ameritrail trailer.