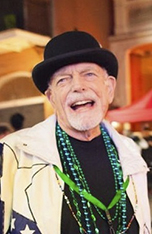 Bud was a native and resident of Port Arthur. Bud attended Texas Christian University before he volunteered to serve his country in the U. S. Army as a helicopter pilot in the Vietnam War, where he achieved the rank of Captain. He worked for U.S. Air and spent most of his time as a pilot for Provost Umphrey Law Firm in Beaumont. Bud enjoyed life to the fullest, traveling, riding his motorcycle, spending time on the water and playing music. He was a percussionist with Jerry Diaz and Hannah’s Reef, a local band.

He was preceded in death by his parents, Dr. Dan Byram and Mary Elizabeth Byram, his wife, Janice Byram.

He is also survived by his sister, Mary Feldman and her husband, Steve of West Palm Beach, Florida, several nieces and nephews and a host of friends.

A celebration of Bud’s life will be held on Sunday, February 26, 2017 from 2:00 PM till 4:00 PM at the Port Arthur Yacht Club on Pleasure Island. Arrangements for cremation are entrusted to Clayton Thompson Funeral Home in Groves.

In lieu of flowers memorial contributions can be made to Crohn’s and Colitis Foundation, National Processing Center, P. O. Box 1245, Albert Lea MN. 56007