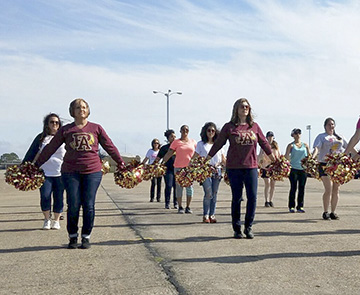 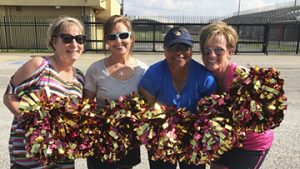 Thomas Jefferson High School cheerleaders take a break from practice for a photo op. The cheerleader alumni will participate for the first time in Total Krewe of Aurora Grand Parade on Saturday.
Courtesy photo

TJ cheerleaders ranging from 1970 to 2003 graduating classes have been prepping for more than a month to take part for the first time in the parade.

“I’m so excited the alumni was finally formed,” Michele Rotondo Larcade, class of 1980, said via email. “we hreally had a lot of interest this irst year and have girls from 19970 to 2003. Being with former yello jacket cheerleaders and being able to cheer again and represent TJ had been so much fun. We are having the best time laughing, making new friendships and are looking forward to performing in the Mardi Gras parade.” 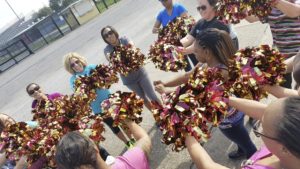 Larcade said the group will be performing the fight song and a routine called “The Horse.” The younger girls did The Horse in their younger years and the older girls had to learn the routine.

“Let’s just say there is a lot of laughing going on but it’s ok because we are having the best time,” she said.

Sasha Blanchard, class of 2000, said she’s had fun practicing and catching up with classmates, some of which she hadn’t seen since high school.

“We are all excited about performing at Mardi Gras this year with Big Buzz leading our way,” Blanchard said.

Practice this month has been a stroll down memory lane as the cheerleaders practiced alongside the TJ Swingsters drill team.

Former cheerleaders who would like to participate next year can email TJCheerAlumni@aol.com. You can also follow the group on Facebook at Thomas Jefferson High School Cheerleaders-Port Arthur.