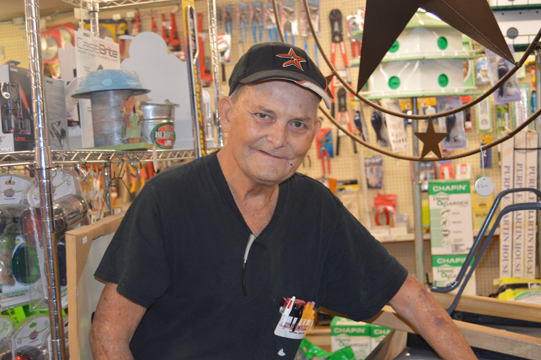 On Saturday, a longtime fixture at Setzer Hardware will be retiring from the local business he has given 52 years of his life to.

Kenny Harris has been working with the Nederland establishment since he was 24.

“He got out of the Navy and he was looking for a job,” Judy Gray, owner of Setzer Hardware, said. “He came by the store and Mr. Setzer was on the front porch.”

When Harris first asked if he could work there, Setzer told him no; however, it appeared persistence paid off as Harris came back three times until the former owner finally agreed to bring him on board.

Gray explained it was because she was a girl and he felt she was taking his friends away.

“He was a little bit jealous, but he’s good now. He’s connected to me now.”

Harris cut pipe and worked in the store warehouse when he first started, though his responsibilities soon took him throughout the store.

“He’s kind of out of the warehouse now,” Gray said. “But for the last 20 years, he’s mostly stayed up front. And he still cut pipe until about four years ago.”

Gray said, “He was real good at pipe, screws, bolts and nuts. He could take care of just about anybody.”

One day, though, the longtime worker suffered a stroke and was hospitalized for a week.

“The day of the stroke he walked over here,” Gray said. “He fell. He said, ‘I fell coming down my steps. My left side feels kind of weak.’”

“He really came back from that stroke,” Gray said. “Doctors say people who usually suffer from those strokes die.”

Gray chalked part of his recovery to Harris’ stubbornness.

“He said, ‘I had no stroke,’” Gray said, recalling Harris riding a bike after the doctors told him to not go out. “I call that hard headed.”

Still, the folks at Setzer rallied behind him as they would family.

“All these boys down here kind of take care of him,” Gray said. “They do things like get his groceries and take him to the doctor.”

Gray stressed that Harris is family to both the store and to her own family. Whenever Thanksgiving comes around, they have him over to celebrate with them.

“He’s funny. He always has something funny to say; he’s got a real dry sense of humor.”

Gray said that customers always ask for him.

“‘Where’s that guy who’s always sitting here who wears the ropes around his knees? He always knows what I want.’”

When the time came for retirement, though, Gray had to be the one to bring it up because Harris most likely would have kept on until he couldn’t.

“I had to make him retire. He would have stayed here until I told him to go,” Gray said. “That’s the way he is. He would come here in the evening, fix a pot of coffee and wait until I leave. He’s just attached.”

But Gray assured him that the door would always be open for him.

“I told him you can come here whenever you want.”

Gray still expects to see him regularly at the shop.

“It’s ‘interesting,’” Casey Carlos, Setzer employee for 8 years, said of his coworker. “If there’s one thing you can use to describe Kenny, it’s ‘interesting.’”

Carlos compared Harris to the fictional character Forrest Gump for all the tales he could tell.

“He’s got stories from he was a kid with the Navy and running all around the states,” Carlos said. “He’s definitely a part of the store. He may be retired, but he’s still here.”

“He’s here everyday. Kids nowadays get the sniffles and say they can’t come to work; but, (Kenny) had a stroke and he still came in.”

Carlos said Harris was the first one in and the last one to leave the store.

For the man himself, Harris said he had a lot of fun working at Setzer and laid much of that credit to good bosses over the years. When asked about some good memories about work, he named every day as one.

“Judy is my favorite boss. She’s good and has helped me out with things,” Harris said.

Harris’ retirement party will be held from 9 a.m. to 3 p.m. on Feb. 25, or during normal store hours on Saturday. Gray said the public is encouraged to attend and cupcakes and drinks will be offered.