Oil find that changed the world benefited PA too 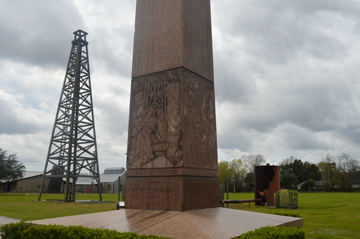 This obelisk at Gladys City at Lamar University in Beaumont commemorates the Lucas Gusher that changed the world and Southeast Texas.

Oil was discovered in Pennsylvania in the 19th century, but exploration in that state paled in comparison to Spindletop.

At times in the early days, 75,000 barrels worth of oil would lie on the ground. Spindletop was discovered at 1,020 feet which is very shallow by today’s drilling standards, Monroe said.

Though the sign has been missing since 2009, the text of the 2004 historical marker reads as the following:

On January 10, 1901, the landscape of Texas changed forever.

Capitalizing on the vast new oilfield, the Port Arthur Townsite and Land Company, which had been creating infrastructure for a railroad and shipping terminal city, deeded an oil pipeline right-of-way to James M. Guffey and John H. Galey. The line transported oil from the Spindletop oilfield to Guffey’s refinery, which became the Gulf Refining Company of Texas. Within three years, more than 500 miles of oil pipelines had been constructed in southeast Texas.

Further expansion by Guffey’s company linked Port Arthur to oilfields in Oklahoma, and his refinery became one of the largest in the U.S.

Area oil pipelines boosted both the Texas and U.S. economies with new businesses, technology and other advances. The pipelines enabled companies to collect and refine Texas oil reserves, and Port Arthur’s location allowed product to be delivered quickly around the country.

The Texas petroleum industry played a large role in U.S. involvement in both world wars and helped establish the nation as a 20th-century superpower.

Today is the last day to file for May…