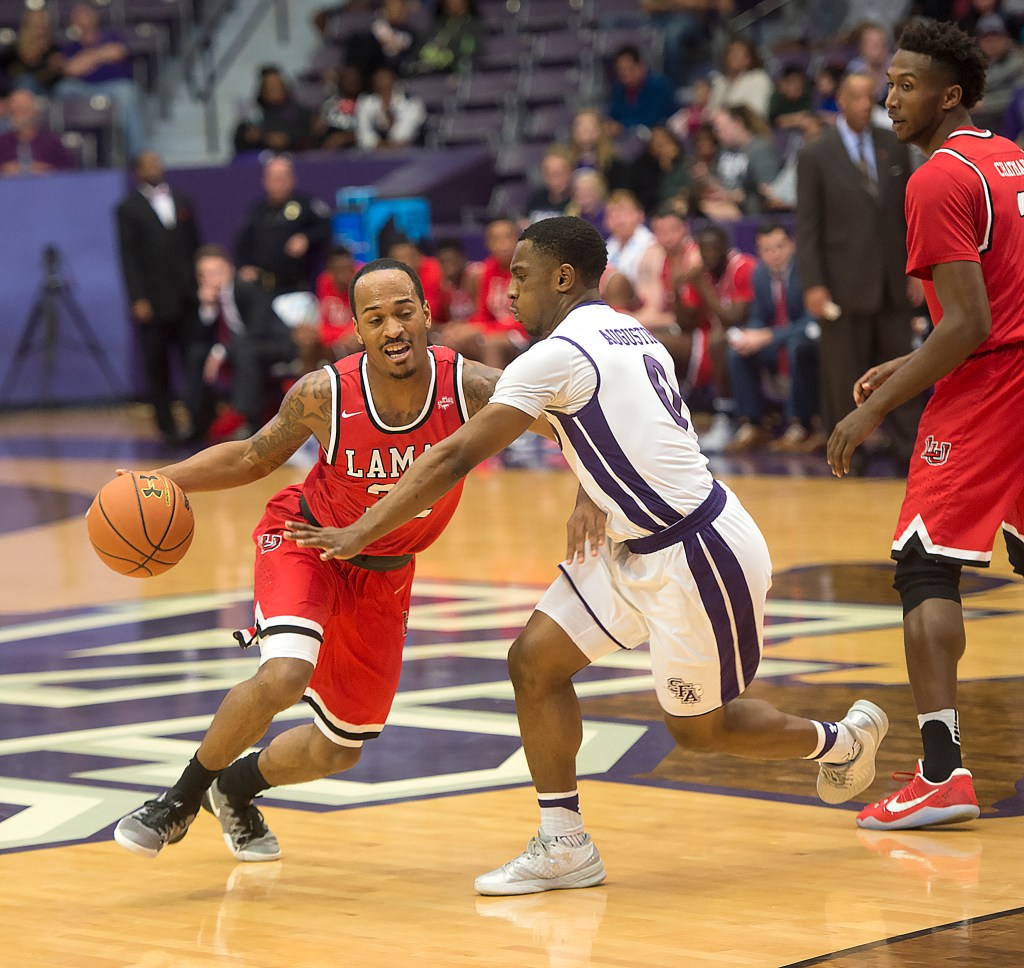 NACOGDOCHES – Despite a hot start offensively for the Lamar Cardinals, Big Red couldn’t overcome 18 turnovers as they fall, 70-61, at Stephen F. Austin Thursday evening in the William R. Johnson Coliseum.

The Cardinals finished the game shooting 41.8 percent from the field, but struggled to just an 11-of-31 (.355)  performance in the second half. The final 20 minutes coming on the heels of a first half that saw LU knock down 12-of-24 (.500) shots. LU was led offensively by 12 points from sophomore Josh Nzeakor, and 11 from classmate Nick Garth.

SFA finished the night shooting 50 percent from the field after connecting on 14-of-24 (.583) attempts in the opening half. SFA also outrebounded the Cards, 36-31. The home team took advantage of LU’s 18 turnovers converting those into 23 points. The Lumberjacks finished the night with a 12-point advantage in the paint behind 17 points from T.J. Holyfield. He was one of five Jacks in double figures.

“We’ve failed the toughness test tonight,” said LU head coach Tic Price. “We had some costly turnovers after we built a six-point lead and gave up some and-ones and missed our block-out assignments. We were not tough mentally. SFA is a very physical team and we didn’t match their toughness or physicality. You also can’t turn the ball over 18 times and expect to win.”

The offenses ruled the opening half of play. SFA knocked down six of its first nine attempts, while the Cardinals knocked down 10-of-19 to open the game. Despite the hot shooting on both ends of the floor, the Cardinals found themselves on the negative side of a 23-16 score midway through the half.

The difference in the game to that points was turnovers. LU turned the ball over five times which led to six SFA points. The Lumberjacks had turned the ball over just three times, but the Cards couldn’t convert those into points. That changed in the final minutes of the half as Big Red forced their hosts into seven turnovers, which LU converted into six points.

Big Red took advantage of a slow start by the Jacks to start the second half taking a 46-40 lead early in the second half, but the Lumberjacks responded with an 8-0 run aided by three costly turnovers. SFA was able to erase the six-point deficit with consecutive and-ones within 17 seconds. That 17-second momentum swing sparked an 18-2 run to give SFA a 58-48 lead. The Cardinals trimmed the deficit to five on a Garth three with 2:04 to play but could get no closer as SFA hit its free throws down the stretch.

The Cardinals return to action Saturday when they travel to Corpus Christi to take on the Islanders. The game against A&M-Corpus Christi will tip off at 7 p.m. from the American Bank Center.

INDIANS HANG ON TO BEAT ROBINSON IN SOFTBALL TOURNAMENT