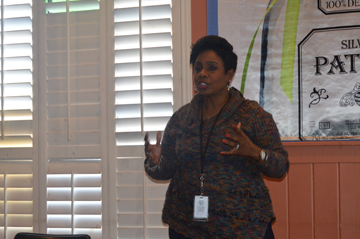 Sheriff Zena Stephens spoke to the Press Club of Southeast Texas about what the Jefferson County Sheriff's Office has been working on the past couple of months.

BEAUMONT — Since being elected in November as Texas’ first African-American female sheriff, Zena Stephens, has made appearances on Harry Connick Jr.’s talk show and she had an article written about her in “Texas Monthly” magazine.

But the Jefferson County sheriff told the audience at the monthly meeting of the Press Club of Southeast Texas in Beaumont it wasn’t about her, it was about the community crossing racial lines and party lines to elect her.

She said there have been several changes at the JCSO since she took over.

For instance, she said she wants to hire people in all areas of the community. Some include members of the lesbian, gay, bisexual or transgender community.

“The world is changing. We can change our culture from within,” she said.

The patrol division has been increased by 14 percent and on weekends there are now as many as 13 deputies on patrol.

The department went from four deputy chiefs down to two — law enforcement and corrections — because Stephens thought they were too top heavy and it’s also a way to save money.

Another way to save money is by rescheduling shifts for the marine unit.

Stephens said the changes she made is not an indictment on prior administrations. She wanted to use a fresh look to serve the community.

The correctional facilities on Highway 69, to Stephens, are some of the most important aspects to the JCSO. She would like to improve security there by installing metal detectors and screening everyone.

“We’re getting drugs into our facilities,” she said.

Stephens said she had to make some of the toughest decisions of her life the first week on the job because some of her longtime friends and coworkers weren’t reappointed to the department. Some didn’t fit into the new organization, but she had to do what was best for the sheriff’s department.

She added that some people were getting complacent, but now many are buying in to the new system.

Stephens said there is more than 500 years of combined law enforcement experience at the top of the department.

“I’ve never been a person who thinks she’s always right,” she said.

She then took questions from the audience.

One was about officers with trauma training dealing with veterans. Stephens said a couple of officers have been trained to de-escalate situations and other mental health issues. Some deputies make visitations to ensure people are on their medications.

Someone said they never see the JCSO or the Beaumont Police Department pull anyone over on Interstate 10 from Smith Road to Pine Street in Beaumont.

Stephens said the motorcycle division does the majority of traffic stops in Beaumont.

“You must be in the wrong place at the wrong time because I see them on I-10,” Stephens said in response.

Stephens said someone running drugs in the county ought to have all of their property taken because they’re out to hurt the community.

“I have a zero tolerance for drugs. I-10 is a corridor for drugs,” she said.

A K-9 unit is also being put together to inspect schools, correctional facilities and highway stops.

One question was if opioids were a problem in Jefferson County.

Maj. Clay Woodward with special ops said opioids are a problem as well as methamphetamines, pill mills, and synthetic marijuana.

Stephens said they have beefed up undercover operations.

The next question involved sanctuary cities.

She said the JCSO is waiting on new legislation to be passed by the Texas Legislature.

She added that the JCSO has a great relationship with Immigration and Customs Enforcement, but retainers for undocumented workers aren’t warrants for arrest.

Dangerous felons, however, can be detained.

“We don’t do racial profiling, but any information outside of that was can use,” she said.

Stephens said the best thing to do is identify the people dealing it and make a case from that.

The JCSO has three helicopters, a fixed-wing aircraft, and eight boats with 15 operators to cover 975 square miles of the county.

Woodward said the US Coast Guard now longer patrols the waterways here due to budget cuts and it’s now up to the marine division of the JCSO to patrol.

“We protect our waterways as we do on the streets,” Woodward said.

Someone asked if plants contribute for the security of the waterway. Woodard said plants fund the entire operation through the Sabine-Neches Navigation District.