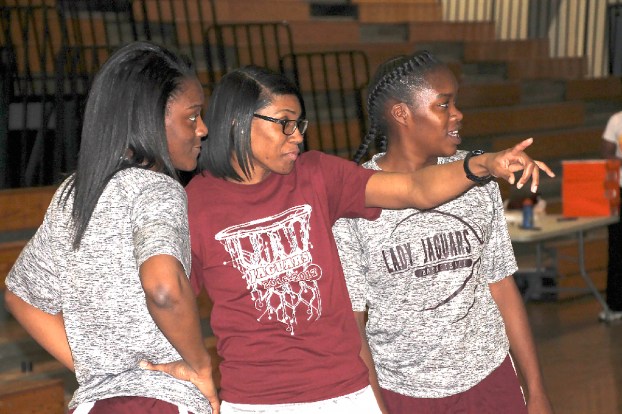 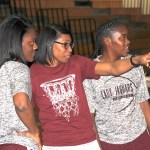 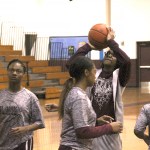 BEAUMONT — RaShonta LeBlanc has plenty of playbooks in her head she could draw from.

She was one of Port Arthur Memorial’s early standouts in girls basketball and parlayed her talents into a four-year career at LSU, playing on four straight Final Four teams at the height of the Lady Tigers’ success.

While she acknowledges adopting the demeanor to basketball from her first collegiate coach, Pokey Chatman, it’s not so much the playbook of her mentors LeBlanc mentioned as it was their approaches to basketball.

“One of her assistants, Robert Starkey, who’s now at Texas A&M, his mental aspect is something I’ve taken from him as far as the preparation and making them prepared,” LeBlanc said. Starkey replaced Chatman late in LeBlanc’s junior season before Van Chancellor took over.

“That and, I think, the enthusiasm I have comes from Travis Mays, who is at SMU [as head coach],” LeBlanc continued. “Just his passion and the way he can relate to the kids.”

Now, in a staid ol’ gymnasium where championship banners with the name Rolander Fontenot adorn the walls, LeBlanc is carrying on a winning tradition at Central Medical Magnet High School. Yet, she’s learned that success doesn’t necessarily come without patience.

“The best thing I learned from coach Fontenot is the patience,” LeBlanc said, “and just to make sure the girls know you care. When they know you care, there’s a lot they’ll do for you. Her appreciation for the game, her courage and the way she cares about the athletes — even the athletes who are out of school come by to see her. It’s more than basketball with her.”

LeBlanc moved into the head coaching role at Central for this season after Fontenot, who had coached 18 years at the school, was promoted to assistant principal. Fontenot remembers when LeBlanc gave her Jaguar teams fits as a Memorial Titan.

“Definitely,” Fontenot said, “during the summer league and the regular season. I’m very familiar with her, and I liked the way she carried herself.”

Central (22-10) finished 10-4 in District 22-5A this season, good for third place, and just dodged elimination from the 5A playoffs Monday with a 77-73 overtime win against a Dayton team that, according to MaxPreps, went 27-5 and 15-3 in 21-5A. Central will face Fort Bend Willowridge at 7:30 p.m. Friday at Channelview High. The winner will play Manvel or Kingwood Park in the third round.

“I saw a fight in them,” LeBlanc said of her players Monday. “They knew it was do-or-die. They showed some fight, which is always a good sign in the playoffs. When times got tough, we came together as a team, and we did what we needed to do to beat a good team.”

Central reached the third round last season, as Fontenot got to tutor her up-and-coming protégé as she learned the coaching ropes.

“She’s believed in the kids and established her own identity as a coach,” Fontenot said. “The kids bought into her system, and that’s the most important thing when you’re replacing a coach who’s been here so long.”

More than a decade ago, LeBlanc was helping to put Memorial girls basketball on the map. She averaged 14.5 points, 6 rebounds, 4.6 steals and 2.3 assists as a senior under coach Joe Fonteneaux in the 2003-04 season. Her graduating class, one before Jamaal Charles and Inika McPherson received their diplomas, is only the second in school history.

It wasn’t long before LeBlanc knew she wanted to coach.

She arrived at LSU shortly after the Tigers’ coach of 22 years, Sue Gunter had retired due to illness. (Gunter died of emphysema in 2005.) Chatman, now the Indiana Fever’s head coach, led the Tigers to three of their five straight Final Fours (2004-08) as Gunter’s successor, and LeBlanc shared two of those appearances with her.

Starkey and Chancellor led the Tigers to the next two national semifinals with LeBlanc, but LSU has never made it to the title game.

Playing alongside the likes of Seimone Augustus and Sylvia Fowles in Baton Rouge, LeBlanc went on to start 89 games in her career, including all 75 her last two seasons. As a 5-foot-7 guard, she had career highs of 19 points (in the 2007 SEC final against Vanderbilt) and nine rebounds (against TCU on Nov. 11, 2007), but was known for her passing and defensive skills.

LeBlanc began her coaching career as a varsity assistant to Tanuya Worthy at Memorial and went back to LSU for graduate school. She worked in finance before deciding it wasn’t what she really wanted to do, so she returned home to work at Lincoln Middle School.

She joined the staff at Central last season under Fontenot, wanting to prepare to become a head coach.

“It just so happened I chose the right spot around the right time,” LeBlanc said. “I’m just blessed.”

Kenneth Coleman noted how Port Arthur Memorial’s basketball gymnasium does not have any basketball banners hanging. He now has a... read more