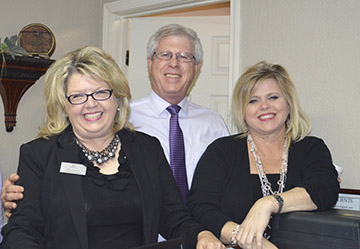 Myra and Bruce Gregory of Gregory Law Firm and Teresa Hammonds, legal assistant, pause for a photo after the law firm was named small business of the year by the Port Neches Chamber of Commerce on Thursday. Mary Meaux/The News

PORT NECHES — Bruce and Myra Gregory had a pleasant surprise while hosting the Port Neches Chamber of Commerce Monthly Networking Coffee on Thursday.

The Gregory Law Firm, 1617 Magnolia Ave., hosted the coffee and owners Bruce and Myra Gregory were named the 2017 small business of the year.

“I’m blown away,” Bruce Gregory said when he heard the business was being honored.

The Gregorys have been married since 1974.

“People ask how can you work all day with your wife? I tell them we like each other,” he said with a laugh. “God is the center of our relationship.”

Besides the law firm, Bruce Gregory currently serves as the municipal judge for the City of Port Neches

Debbie Plaia, executive director of the Port Neches Chamber of Commerce, said each year the chamber selects a business whose owners are involved in the chamber, community and city.

“They do a lot for the chamber, the city and community,” Plaia said. 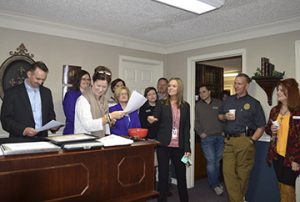 Recently installed chamber president Olin Clotiaux welcomed the crowd and gave a quick run-down of upcoming events including Monday’s catch a Shooting Star annual chamber fundraiser where participants buy a $100 ticket for a chance to win $10,000 in gold. He then discussed the upcoming Golden Triangle Days in Austin which is set for March 5 to 7, spring break for local schools scheduled for March 13 through March 17, the Miss Port Neches Pageant set for April 1 and RiverFest which will be held may 3 through May 7. 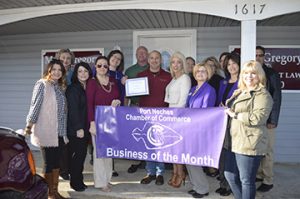 Jon and Rachel Carona, center, of Advantage Real Estate, were honored as the Business of the Month by Port Neches Chamber of Commerce on Thursday.
Mary Meaux/The News

Also during the event the chamber recognized Advantage Real Estate as business of the month. Owners Jon and Rachel Carona were there to accept a framed certificate and the honors.