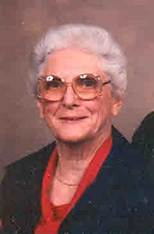 She was born on April 20, 1919 to Genervia Murphy LaBove and Amadie LaBove in Creole, Louisiana. Carrie graduated from High School in Cameron, Louisiana. She was a former resident of Silsbee, Texas from 1982 until her husband’s death in 2006, when she moved to Sabine Pass. Carrie was a loving and caring homemaker in raising her family. She was affiliated with Sabine Pass United Methodist Church.

Carrie was preceded in death by her parents, her eight siblings, her great grandson, Clifton White and her husband, Woodrow Wilson LaBove.

Visitation for family and friends will be on Thursday, February 16, 2017 from 5:00 PM Till 7:00 PM at Clayton Thompson Funeral Home in Groves. Service to honor Carrie’s life will be at 11:00 AM Friday, February 17, 2017 at Clayton Thompson Funeral Home. Burial will follow at Oak Bluff Memorial Park in Port Neches with Rev. John Harrold, officiating.