A warrant has been issued for a woman suspected of striking a Port Arthur Police officer with her car and police need the public’s help in finding her.

Patrise Young, 37, of Port Arthur is sought for aggravated assault on a police officer for an incident that happened Sunday at Cedar Ridge Apartments.

“As they (officers) were speaking with her she jumped back in her car and accelerated as the officer was trying to remove her from the vehicle,” PAPD Officer Mike Hebert said. “As she jumped in he was thrown to the ground from the jolt of the car and all indication shows she ran over the officers legs.”

The officer, Ashton Moss, has been employed with the department since 2016. He underwent surgery on the night of the incident and is still recovering from serious, non-life threatening injuries. 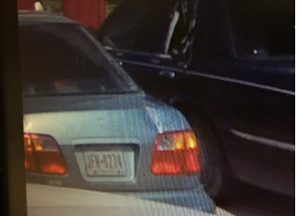 The Honda Civic was last seen northbound on U.S. 69. The front door to the car is partly open and unable to be closed due to damage.

“This went form routine to a very violent encounter in a mater of seconds,” Hebert said.

Anyone with information about the whereabouts of Patrise Young is asked to call Crime Stoppers at 833-TIPS.