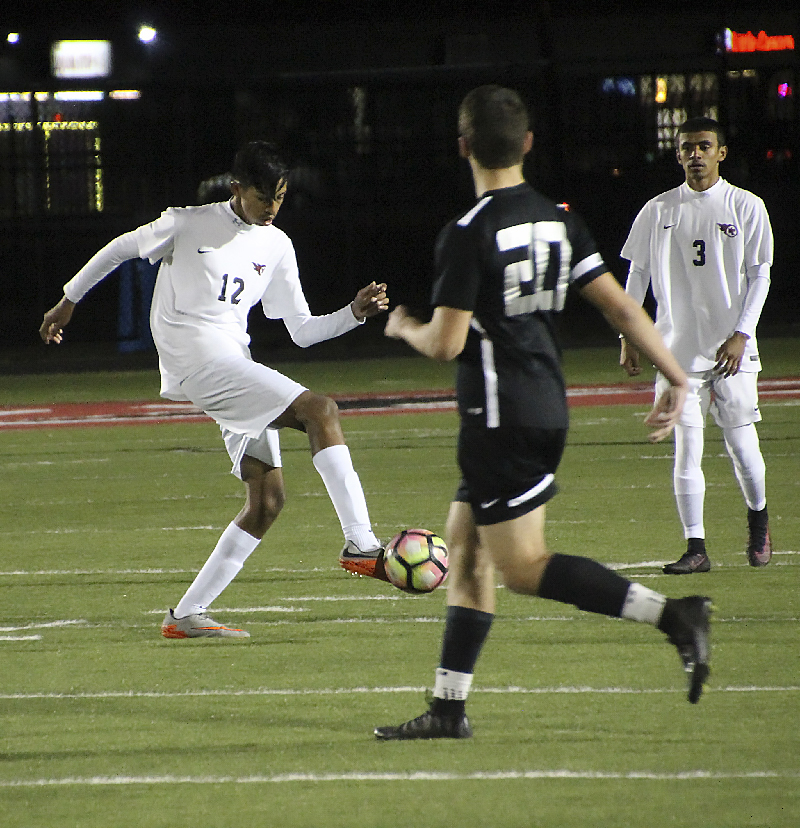 Kenneth Coleman noted how Port Arthur Memorial’s basketball gymnasium does not have any basketball banners hanging.

He now has a reason to change that.

Memorial did not leave anything to chance on the road Tuesday, blowing out Livingston 75-37 to win its share of the District 22-5A boys championship.

Central, which handed Memorial its only district loss of the season, shares the title with the Titans after beating Ozen 52-40 at Ford Park in Beaumont.

Central’s and Memorial’s head coaches are expected to discuss today how to break the tie for the No. 1 seed in next week’s 5A playoffs. Going into Tuesday’s games, Barbers Hill and Dayton were tied for third place in 21-5A at 11-6 apiece, with Kingwood Park and Crosby each a game behind.

Jones scored 27 points, while Hefner totaled 10 rebounds to go with eight points. Nederland’s win secured a third-place tie with Ozen, and a coin flip will determine which team gets the No. 3 seed in next week’s playoffs.

The fourth seed will take on Humble, while the third seed will face Porter.

PORT NECHES — With one clutch basket, Edsel Damo pulled Port Neches-Groves out of the bottom of the 22-5A standings.

Damo drove from the left wing and pulled off a short-range running jumper from the baseline just before the buzzer that went through the net in the Indians’ season finale. The win ended their season at 7-21 and 3-11 in 22-5A, tying them with Vidor for sixth.

Damo scored all five of his points in the final quarter. Hunter Curtis led PNG with 12 and Derrick Papa totaled 10 in his final PNG game.

SABINE PASS — The Sharks are going back to the 2A playoffs.

Jamyus Jones and Daniel Sam teamed up for another big performance again, and Sabine Pass held off Deweyville to wrap up fourth place out of District 24-2A. Jones scored 23 points and had five rebounds. Sam nearly matched Jones’ stats, but had 22 points while hitting 10 of 20 from the floor.

Next for the Sharks is Pineywoods Community Academy in a 2A bi-district game next Tuesday. A site for the game has yet to be finalized.

At Memorial Stadium, Vidor went on a tear in the first of two 10-minute overtime periods, and the Pirates downed the Titans, who actually outshot the visitors 11-6.

Ricardo Green had nine saves for the Titans, who will host Nederland on Friday.

Nederland’s game at Livingston has been moved to today because the field there was unplayable.

Mia Delgadillo made two assists, and Sophie Brant and Kacie Wallace each added one.

NEDERLAND — Meg Sheppard nearly scored all of Nederland’s goals, and Madison Ledet contributed with two assists and a score.