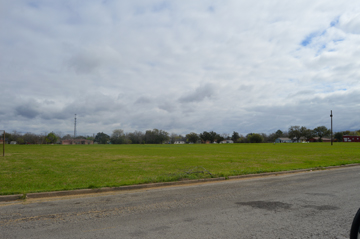 This lot is the old site of the Franklin Elementary School at 1000 10th St. in Port Arthur. Councilman Willie "Bae" Lewis Jr. is concerned the property could become a low-income housing project.

One Port Arthur city councilman is concerned a Port Arthur property could be developed into low income housing units.

Willie “Bae” Lewis Jr., District 5 councilman, had Paul Brown with the planning and zoning department, give a presentation on the use of the land on Franklin campus at 1000 10th Street at the regular meeting of the Port Arthur City Council on Tuesday morning.

The property was zoned as Multifamily in 1973. Lewis said its still owned by the Port Arthur Independent School District and no one is interested in developing it.

Lewis said a complex can be placed at that property without public or city council input.

Brown explained the planning and zoning department approves the preliminary plat and also the permanent plat. A developer can’t build above ground until the council signs off on any public infrastructure adjustments made. Then a building permit is issued.

A property owner can request a zoning change of a property.

“We don’t want any more low income houses in a residential neighborhood,” Lewis said. “The PAISD can come here and argue their case. I knew it was Multifamily.”

Mayor Pro Tem Raymond Scott Jr. said he had a problem with the citizens not having a say-so of what goes in without going through the process.

City Attorney Val Tizeno said the city needs to speak with the property owner because they have the final say-so to avoid any problems.

“It’s very, very difficult to rezone a property without the owner’s consent,” she said.

Lewis said the Franklin campus is a publically owned property by the taxpayers and the school board may be voted out if they don’t do what the taxpayers want.

Mark Porterie, superintendent of PAISD, said they are in the middle of a bond issue and they would like to get their plans in gear before selling the property.

In other city business, the city council approved a resolution to support establishing a police, fire and emergency medical services Explorer programs.

Charlotte Moses, Place 7 councilwoman, said she returned from a National League of Cities meeting in Philadelphia, Pa. and heard about the program in which students could prepare for public service careers.

The Explorers are actually part of the Boy Scouts of America. The program gives insights into police, fire and EMS careers. It is opened to boys and girls.

Locally, the Vidor Police Department has a chapter and the PAPD is reaching out to them to develop their program.