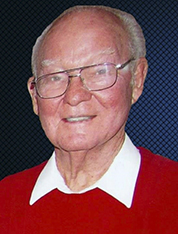 Leroy Tompkins was born August 7, 1935 in Port Acres to Johnney and Thelma Monk Tompkins. He grew up in Port Acres, but has been a resident of Nederland and an enthusiastic Bulldog fan since 1960. He married Ruth Huckabay, July 24th 1954, and in the over 62 years they were married he never tired of kissing his “sweetheart” in front of his children, grandchildren and great-grandchildren. He retired from Gulf Oil as an electrician with 32 years service. After retiring he developed Carriage Estates in Nederland, was a home builder and was also the owner and manager of D & S Mortgage Company. He served nine years in the Texas National Guard.

He was a devoted husband, father, grandfather and great-grandfather who loved his family, especially his grandchildren deeply, and constantly reminded each one of them of how much he loved them. He helped build Special Adult Center, was a Special Olympic coach, and a past Jefferson Award Winner. His family always came first and he was always very proud of their many accomplishments, and would brag to anyone who would listen. He was especially proud of his son, Mike, for winning a gold medal in the International Special Olympics with Arnold Swartznegger presenting it to him.

He enjoyed attending his grandchildren’s events, whether it was sports, band concerts, recitals, etc. He was a very hard working man and spent many hours working in his yard and enjoyed having young people come each year to have their prom pictures taken around the pool, gazebo and waterfall in his back yard. He always enjoyed playing with his grandchildren and they dearly loved their PawPaw. They all liked to help their PawPaw build things, and they liked to brag that PawPaw helped build Tug Boat Island.

He was especially proud of his other two children, Danny and Sharie, and the grandchildren they gave him and their wonderful children. His family was everything to him. He also enjoyed the monthly get-togethers with “The Way” Sunday School Class at First Baptist Church Nederland, where he was an active member for many years and member of the choir and Silvertone choir for several years.

A gathering of family and friends will be held at Melancon’s Funeral Home in Nederland, Texas on Wednesday, February 15, 2017 from 5:00 p.m. until 8:00 p.m. The funeral service will on Thursday, February 16, 2017 at 10:00 a.m., also at the funeral home with the Rev. Dr. Jason Burden, Officiant. Burial will follow at Oak Bluff Memorial Park in Port Neches, Texas.

Memorial contributions may be made to First Baptist Church of Nederland.