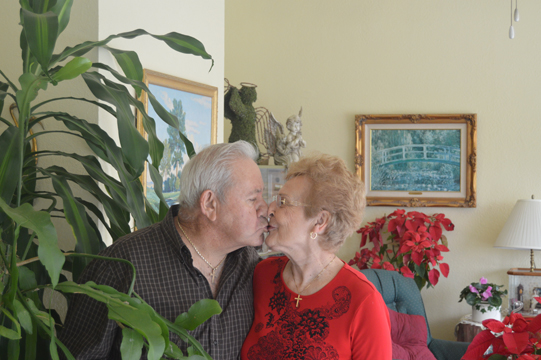 Love could often times serve as a universal medium that transcends language, culture and country. For those people who first met their future spouse somewhere far from home, that universal medium becomes even more important.

Leo and Baerbel Begnaud first met in May 1959 in Berlin during the Cold War. He was 20 and stationed with the Air Force; she was 18 and unaware of how her life was about to change forever.

“We first met at a dance place,” Leo said. “I was scheduled to work and I got off early. And my roommate said, ‘There are a couple of girls I want to introduce you to.’”

When they met, neither spoke the other’s language.

“That was the problem when we first met — I didn’t know German and she didn’t know English,” Leo said.

But that did not mean there weren’t ways around that obstacle.

“She had an older sister who spoke English,” Leo said. “And when I met her, I told her sister that I would like to dance with her.

“And during our first four or five dates, her sister was always there,” Leo said. “And then I thought, ‘I think I know enough German to do this without her.’”

However, the romance was not as immediate as it is in the movies.

“It was not love at first sight; it was a gradual thing,” Bell said.

“I had to dance with some other girls before I realized she was the one,” Leo said.

Yet when that realization came, it came fast — as did their engagement.

“I kept thinking, ‘I don’t want to disappoint this girl,’” Leo said. “I just wanted to see how this worked; and, it worked out beautifully.”

“I was just very comfortable with him,” Bell said. “And when we talked—when we could talk—I could talk with him better than anybody I knew.”

Bell said, “I used to tell him, when I was in his arms, that the ceiling could come down right now and I wouldn’t care.”

Leo and Bell became engaged in December of that year when he proposed to her on Christmas. They married on May 25, 1960—a year from when they first met.

“The thing was, my mom said he looked a lot like my dad,” Bell said. “We already knew about Americans by then; so, I think she agreed because he looked like my dad.”

The young couple was also present during the erection of the Berlin Wall.

“In August of 1961, we were there at the protests,” Leo said. “But much like the protests we have right now, it didn’t do much.”

Still, Leo and Bell returned to the states after the birth of their first child in 1962. As for the secret to their more than 55 years of marriage, they did not think there was any secret at all.

“Whenever you make a pledge to get married to someone, you know this is a thing for life. And we do have our share of bad times, but good times as well,” Leo said.

Leo said what helps is they always solve their discussions or disputes.