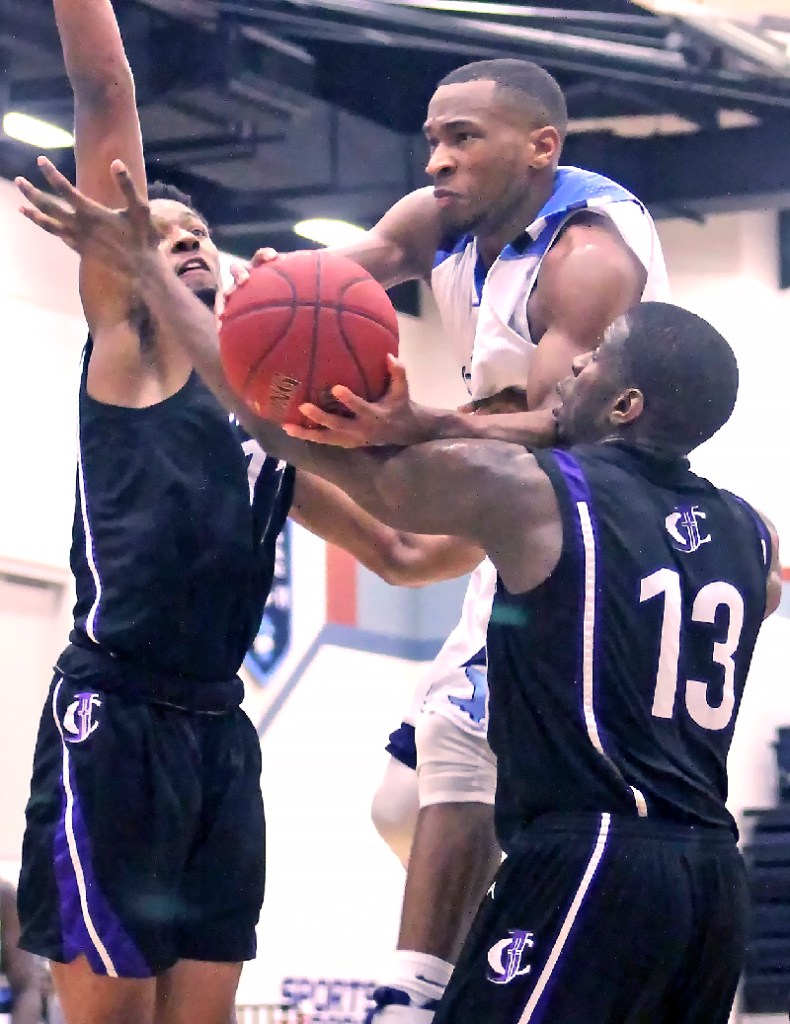 How do you stop a strong offense? Show up with a stronger defense.

Lamar State College Port Arthur limited an explosive Jacksonville College team to just 26 first-half points then dominated both ends of the court in the second half to claim a critical 76-63 NJCAA Region 14 win at the Carl Parker Center on Saturday afternoon.

“Our No. 1 objective was to hold them down and we were able to do that,” LSCPA head coach Lance Madison said. “We were focused and engaged and tonight, we were just a little bit tougher than Jacksonville.”

The Seahawks out-rebounded the Jaguars 40-35 and forced 12 turnovers to keep Jacksonville on its heels for most of the game.

At the same time, the Hawks produced points. Freshman John Comeaux led LSCPA with 22 points and six assists as the Seahawks left nothing to chance, dominating in the first half then maintaining through the final 20 minutes for the win.

“The fact is, our defense is getting better,” Madison said of his predominantly freshman program. “That’s been the key in the last few games. We’ve dug in and guarded some people and that’s what has given us the edge that we needed.”

After a back-and-forth battle through the first 8 minutes of the game and facing the fifth tie of the contest at 14-14, Comeaux hit a free throw to give LSCPA the lead for good with 10:59 to go.

The Hawks extended out to as many as seven points but Jacksonville refused to lie down, pulling to within two at 28-26 with 3:14 left in the half.

The Seahawks’ bench depth contributed considerably to that first-half success, scoring 14 of the 37 points at the break and 21 points overall.

“Our bench has really provided some production and that’s key to us being successful,” Madison said. “To have that depth makes us so much more of a threat.”

“Tra has put together some really consistent games,” Madison said. “He’s a hardnosed kid, he can out-jump people, he has a quick first step to the basket. He’s been great coming off the bench for us.”

The Seahawks extended their lead to as many as 18 in the second half and in spite of an offensive burst that cut that lead to nine at the 18:53 mark, the Jaguars never got closer than double-figures after that as LSCPA fought to the final buzzer.

Petar Radojicic picked up another double-double performance with 11 points and 14 rebounds. He currently leads Region 14 in rebounding with 10.4 boards a game.

The Seahawks are now 5-9 in conference play, 15-9 overall, as they get ready for the final five games of the regular season, three of which are on the road. LSCPA travels to Lufkin for a 7 p.m. tipoff against Angelina College, one of the top-ranked teams in the conference at 10-3. The Roadrunners come into the mid-week game after a bye date Saturday. Their last loss came at the hands of the Seahawks, a 77-59 decision at the Carl Parker Center on Jan. 18.

The Seahawks then take a trip to Baytown on Saturday where the Lee College Rebels await. That game tips off at 6 p.m.

BC, O’field tipping off playoffs this week