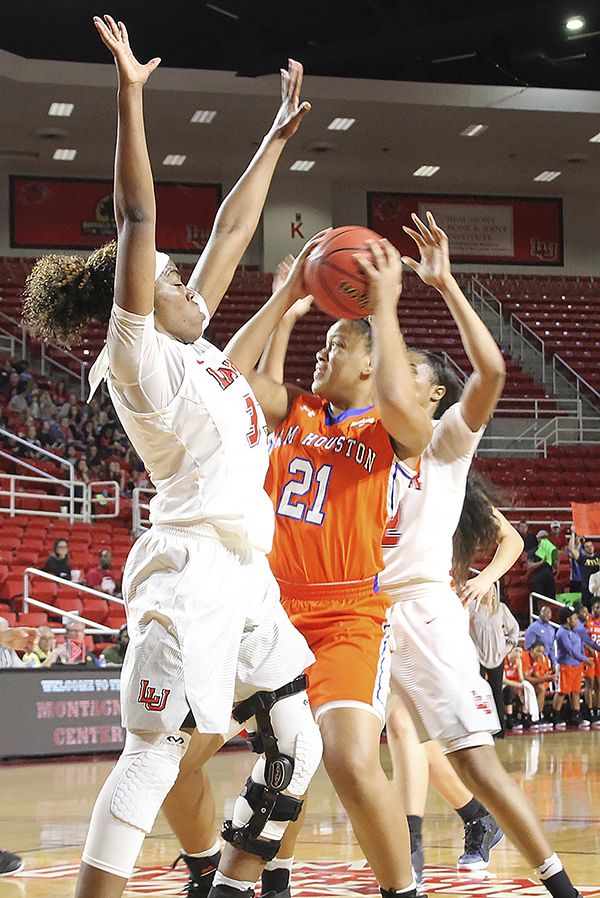 Kiandra Bowers, front, and Kiara Desamours of Lamar defense a putback attempt by Lydia Baxter of Sam Houston State in the first half Thursday night in Beaumont. (I.C. Murrell/The News)

BEAUMONT – The Lamar Cardinals created a plethora of turnovers to make it a baker’s dozen of wins at home this season as they rolled to an 84-51 victory over the Sam Houston State Bearkats in a Southland Conference women’s basketball game at the Montagne Center on Thursday evening.

The Cardinals turned 27 Sam Houston State turnovers into 47 points as LU (17-5 overall, 10-2 Southland) improved to 13-0 at home this season, but more importantly, moved into a first-place tie with Central Arkansas atop the SLC standings.

The Cardinals were never really threatened in this one, scoring the game’s first four points and never looking back. LU led by as many as 46 points early in the fourth quarter before emptying the bench.

LU senior Kiandra Bowers registered her 13th double-double of the season, and 20thof her career, finishing with a game-high 17 points to go along with 10 rebounds. Moe Kinard had 15 points, while Chastadie Barrs flirted with a triple-double, finishing with 11 points, nine assists and seven steals.

“We wanted to limit their minutes because we have a big game on Saturday,” LU coach Robin Harmony said in referring to the weekend showdown at SFA, which is just a half-game behind the co-leaders. We took care of business tonight.”

LU, which entered the game as the national leader in steals, turnover margin and turnovers forced, padded those numbers against the Bearkats. LU had 22 steals and won the turnover battle by 16.

LU led 27-10 after one quarter and 40-22 at intermission. The Cardinals quickly quashed any hopes the Bearkats had of a comeback by outscoring Sam Houston State 2-6 in the third quarter to make it 69-28 heading into the final period. The Cardinals scored the first five points of the fourth quarter to make it 74-28 before the Bearkats were able to cut into the final margin.

In the end, nine Cardinals had at least two points and 10 grabbed at least two rebounds as LU ran its winning streak to five games.

DeA’ngela Mathis had 10 points, while Baileigh O’Dell finished with eight points in the win.

LU and Central Arkansas are 10-2 in conference play, while Stephen F. Austin and Abilene Christian are 9-2. The top two seeds receive byes into the semifinals of the Southland Conference Tournament. Abilene Christian, which is in its final season of transition from Division II to Division I, is not eligible for the tournament.

The Cardinals are at Stephen F. Austin at 3:30 p.m. Saturday. That game will air live on KLVI-AM 560 and be streamed on ESPN3. The game at SFA opens a three-game road swing for the Cards, who are at Houston Baptist on Feb. 15 and Teas A&M-Corpus Christi on Feb. 18. LU’s next home game is 2 p.m. Feb. 25against Houston Baptist.

IT TAKES A THIEF

Barrs now has at least one steal in all 53 games in her career. She has 102 steals this season, fifth on the LU single-season chart. Her 225 career steals are third all-time at LU.

Barrs’ 147 assists this season are seventh on the LU single-season chart.