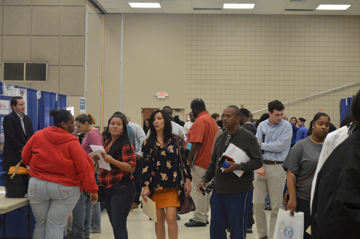 More than 600 attendees and 48 employers were at the first-ever Port Arthur Works 2017 Job Fair held on Thursday morning at the Bob Bowers Civic Center in Port Arthur.

Tori Thomas said she was looking for a line of work she would feel comfortable in and one that would work around her college schedule.

Thomas was one of hundreds of others who made their way to the Port Arthur Works 2017 Job Fair that was held on Thursday morning at the Bob Bowers Civic Center.

Organizers described the event as a community effort to connect local employers with the talented workforce that exists in the community. The Port Arthur Economic Development Corporation, the Greater Port Arthur Chamber of Commerce, The Port Arthur News and Workforce Solutions Southeast Texas sponsored the event.

Diantrae Lancelin was looking for work in construction.

“I want something hands-on where I can get my experience,” Lancelin said.

Kevin Clark goes to church with Lancelin and he thinks he would do a good job for an employer.

“I hope he has a chance to get his foot in the door. He would work hard in a job,” Clark said.

Krystle Villarreal Muller, employment and training specialist for the PAEDC, said for a first-time event, there has been good attendance.

“This is the first year for this and we have a really good turnout. We’ve had 600 people here and 48 employers,” she said.

She added that many attendees are looking for industrial or construction jobs, but actually they’re looking at a variety of fields.

The job fair has fulfilled the goal of connecting employers with job seekers, she said.

“Hopefully was can do this annually,” she said.

John Fleming is a recent graduate in chemical engineering from LSU.

He was looking at entry positions in the petrochemical field. Though he said he had some promising leads, things are still al little slow in the job market, but he wasn’t going to let that slow him down.

“I stay positive,” he said.

Carmen Colindres, talent acquisition manager for Brock Services, said they have received many good responses and resumes at the job fair and some qualified people who have worked there before applied.

The company builds scaffolding, does insulation, fireproofing, and paintwork.

“We always have something available in those departments,” she said.

Barbara Phillips, HR specialist with the Valero Port Arthur Refinery, said it was “an excellent crowd” in attendance and their company was excited about being part of the job fair.

“This may help some Port Arthur residents get jobs,” Phillips said.

Elaine Gravis with Valero said their booth has been busy all morning with visitors.

They will be hiring maintenance workers at the end of the quarter after they conduct a class as well as another operators’ class during the summer.