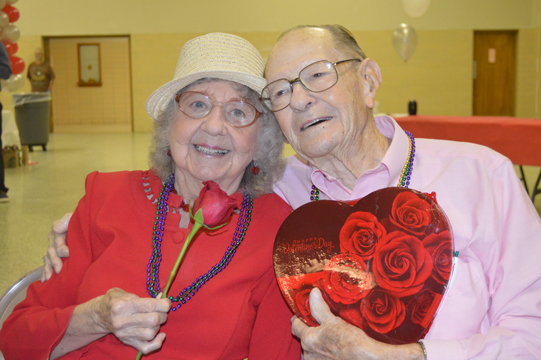 Audrey and Robert Todd sit together to celebrate their 72-year marriage at the annual Valentine party hosted by Walgreens at the OCAW hall in Port Arthur. (Lorenzo Salinas/The News)

If love could be measured in miles, then it traveled to the stars Tuesday as long-married couples gathered, danced and reminisced at the annual Valentine party hosted by Walgreens at the OCAW hall in Port Arthur.

“This is a celebration for those couples who have been married for 50 years or more,” Bettie Peltier, volunteer and former event coordinator, said. 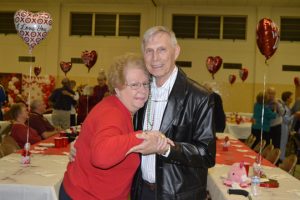 Linda and Roy Jones cut a rug together at the annual Valentine party hosted by Walgreens. (Lorenzo Salinas/The News)

“It gives them some recognition for the years they’ve been together,” Billy Price, store manager for the Walgreens in Bridge City, said.

“It started out as something so much smaller,” Peltier said. “They used to do it in front of the Walgreens in Jefferson City, but then they had to move it because it got too big for that.”

Peltier said it moved from Twin City to the Port Arthur Library and then to Our Lady of Guadalupe before finally settling at its current location for the past 17 years.

In fact, the annual event has been going on for almost as long as the couples’ marriages have been going — somewhere around the 40-year mark to the best recollection of its assorted volunteers.

“We figure if you could make it for that long…” Peltier said with a laugh when discussing the 50-year marriages.

Among the two longest married couples at the party, each seemed to enjoy their time there. 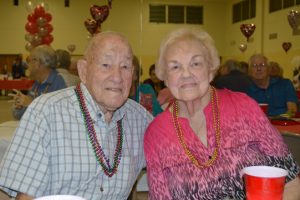 J.D. and Pattye Mire sit together to celebrate their 72-year marriage at the annual Valentine party hosted by Walgreens at the OCAW hall in Port Arthur. (Lorenzo Salinas/The News)

Both spouses are Port Neches natives.

“I was best friends with his sister who now lives in Chicago,” she said. “And we met through her.”

“We were married on my 19th birthday,” Pattye said.

“I was in the service at the time, and we took the train back to Kansas,” J.D. said, who was stationed in Kansas at the time.

The Mires have four children — three daughters and one son — who in turn have given them 16 grandchildren.

As for the Valentine party, it was only their second time to attend it.

“It’s something for us,” Pattye said. “It’s always so nice. We enjoyed it so much last year, we decided to come back here.”

The Mires were awarded second place for the second-longest marriage among those gathered at the event. First place went to a longtime couple who had married the same year, only a couple of months before the Mires. 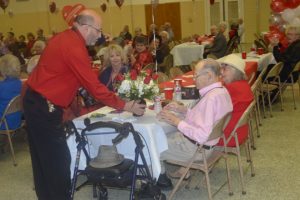 Tony Ramirez awards a bouquet of flowers to the longest married couple at the event, Robert and Audrey Todd. (Lorenzo Salinas/The News)

Audrey and Robert Todd have been married for 72 years; and, they attribute that span to their faith and their love.

“God helps us,” Audrey said. “And we just love one another and we do what we can for each other.”

Audrey and Robert first met through her sibling. She was 15 and he was 18 when they met.

“Actually, (Robert) brought my brother home one night. He said to him, ‘You didn’t tell me you have such a cute sister,’” Audrey said.

“All are in good health,” Audrey said.

According to her, they have been coming to the annual celebration for 22 years.

“We think it’s a wonderful time, all these people celebrating over 50 years of marriage,” Audrey said. “We enjoy the fellowship here very much.”