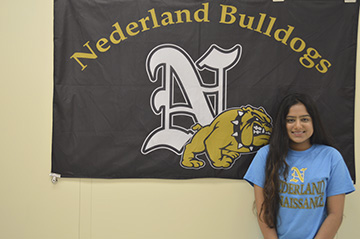 Nederland High School senior Muskaan Ali is ranked 10th in her class and spends time studying and with her church.

NEDERLAND — Muskaan Ali has made it a point to go the extra mile as she strives for academic excellence.

Ali, a Nederland High School senior, is ranked 10th in her class and she admits the journey there wasn’t smooth. Born in the United States, her parents are from India and she was enrolled in English as a second language courses until the fifth grade.

While in elementary school she attended summer school not because she needed to but instead to reinforce what she learned during the school year.

“I’m glad they sent me,” Ali said. “”My reading improved and I saw my other scores increase.”

Ali continued studying and by the time she got to high school wasn’t sure if she was on track for a spot near the top. Some of her classmates were already enrolled in advanced placement courses and she was just a small step behind.

“I know those taking geometry were ahead of me and I wasn’t as motivated to succeed,” she said. “By my sophomore year were found out our rough ranking and I was 17 and realized that was without geometry.”

Realizing she had a chance she began pursuing the courses she needed to succeed. Those included anatomy and physiology, banking courses and other advanced courses.

“It was overwhelming,” she said. “But I was surprised I got As.”

Ali earned a number of honors awards for having the highest grade in her classes. In addition, she is part of her school’s University Interscholastic League academics team.

Ali is a member of the National Honor Society, the Spanish Honor Society and an officer in Terrific Nederland Teens organization.

She is also taking three science course this year and is co-enrolled at Lamar State College Port Arthur.

Ali hopes to attend either the University of Houston of Lamar University where she will major in biology while pursuing a career as an ophthalmologist.

The reason for her chosen career field is two-fold.

“My parents have always had goals and dreams for me. I’m their eyes basically,” she said. “And I’m far sighted and have a connection with those who do not have perfect sight. Maybe later I can go into the surgical part of the career. It’s a challenge but I’m up for it.”

Ali divides her time between academics and volunteeriing at her church. She’s part of several groups at her church including the religious education center where she teaches first graders about religion, aging gracefully initiative where she helps the elderly with transportation or other types of assistance and the early childhood development center for ages birth to 6-years-old.

“I focus on my church a lot,” she said. “It’s a Muslim church and there’s not a lot of people there.”

Ali began helping out with the first graders when she was in the eighth grade with the assistance of a college student. As she progressed she began to take the role by herself.

In order to balance her busy schedule she has two separate planners.

“I have one for home and one for school,” she said. “I number things by what’s important. Say, two hours to study for a test. Then, what quiz do I have to study for and I’ll allot 30 minutes for that. When I need some extra help, I’ll stay after school and will do extra work to bring my grades up.”

With her busy schedule she has found a way to de-stress — helping others.

“I like to help people. I like to be involved,” she said, adding that she often travels to other cities for community service such as helping out a food bank.

While other teens may take in a movie on the weekends she’s teaching young children at her church — this, she said, brings a smile to her face.

Muskaan Ali is the daughter of Rozina Ali and Iqbal Ali.