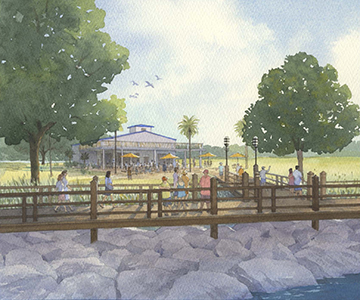 A rendering for the City of Port Neches riverfront Planning and Design, released in January, shows one idea for improvements along the riverfront.

PORT NECHES — Leaders in Port Neches are looking to create a special purpose district that could help with development of the city’s riverfront area.

But to facilitate the issue, the city first needed to hire a legal firm. They did that on Thursday with the hiring of Smith, Murdaugh, Little & Bonham, LLP.

Port Neches City Manager Andrè Wimer said that in order to create a special purpose district, the approval of the Texas legislature is needed and the law firm was hired to facilitate this.

A special purpose district is a government entity, like a school district, and it can have a broad array of powers. Some are routine and likely would not need the approval of city council. Some powers, however, of greater significance, will require the approval of council such as the levying of taxes within the boundaries of the district or issuing debt that would be repaid only by taxes generated from within the boundaries of the district.