Neumann still there for Nederland 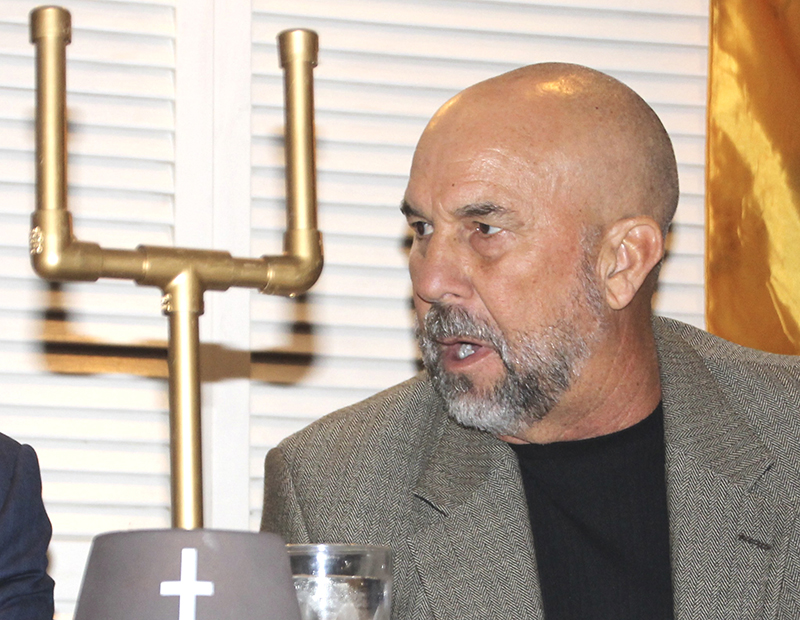 Instead, he gave a telling memory of Larry Neumann.

“Coach Neumann is the most inspiring speaker you ever heard,” Smith said. “The words may not always make sense, but he gets you going, no doubt.”

Neumann was relatively silent when his retirement as Nederland’s head football coach and athletic director was announced Jan. 2. For a number of days, the only public comments attributed to him came in third-person form in a Nederland ISD news release.

“… Coach Neumann has expressed his desire to spend more time with his family after devoting 43 years as an educator and coach,” it read. “Coach Neumann thanks the board of trustees, superintendent and administration, staff students, parents and community for their

commitment and support of the district’s programs during his tenure as athletic director and head football coach.”

At the time, Neumann didn’t return calls seeking direct comment. But the statement was not the last to be heard from the man who led the Bulldog football team for 24 seasons.

The city of Nederland presented him with a citation and declared Jan. 23 Larry Neumann Day.

A week later, he sat at the head table for the Bulldogs’ team banquet at the Pompano Club.

On Wednesday, one day after his retirement, Neumann witnessed two of his senior players sign letters of intent to play at the collegiate level.

“When I heard Neumann was retiring, it never occurred to me he might not be here,” said Smith, the Bulldogs’ standout offensive tackle headed to Rice. “I knew he’d find a way to be here. He’s the type of guy who always has your back, and we’ve got his back.

“Just the way he trained us and coached us. It’s a loyalty.”

The significance of the signing ceremony in the Dog Dome was hardly lost on anyone. Wide receiver Connor Perkins and Smith are the last two of Neumann’s pupils to officially commit to a football program. Perkins signed with Division II powerhouse Texas A&M-Kingsville.

“I’m proud of those guys,” Neumann told The News. “You know, it’s a tribute to their hard work and commitment. It doesn’t happen overnight. I’m really happy they’re getting this opportunity.”

On that day, Monte Barrow, a longtime offensive coordinator under Neumann, was the man introducing the signees, a role reserved for Neumann in past years. The newly retired coach stood just a few feet away, watching two of his players take the next step in their football careers.

Life after retirement, Neumann said, has been pleasant.

“I think there are some decisions in everyone’s life that you have to be completely sold on before you do it, [like] getting married, whatever,” he said. “I have no reservation about my decision to retire. It’s been really good so far.”

The Nederland ISD is expected to interview candidates to succeed Neumann in the coming days.

Neumann said his decision had nothing to do with the Bulldogs’ 4-6 record this past fall, which resulted in missing the UIL playoffs for the first time since 2007. Nederland had to forfeit a 51-9 win over Livingston that would have helped the Bulldogs qualify for using an ineligible player.

In fact, Neumann — who went 186-93-1 at Nederland and won eight district titles — added no one thing was the reason for retiring.

“It was a combination of a lot of different things through the course of time,” he said. “I can say this: Every one of my reasons that had something to do with my decision was positive.

“Coaching, sometimes, you don’t get that opportunity, especially coaching. It was the right decision for all the right reasons, and my wife and I and my family are excited about the future.”