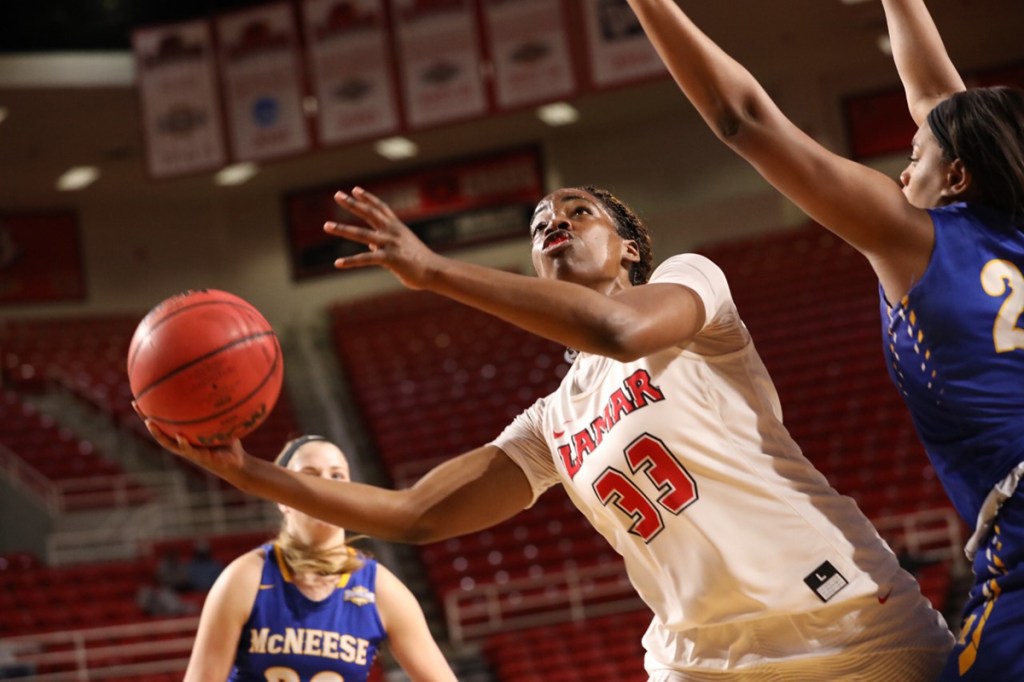 Kiandra Bowers of Lamar tries to scoop in a shot against McNeese State on Saturday. (Jeff Kellum/Lamar sports information)

BEAUMONT – Kiandra Bowers continued her dominant play as she powered the Lamar Cardinals to a 79-57 win over the archrival McNeese State Cowgirls in a Southland Conference women’s basketball game Saturday afternoon.

With the win, the Cardinals (16-5 overall, 9-2 Southland) moved into a tie with Central Arkansas in the battle for the top seed in next month’s Southland Conference Tournament in Katy.

Bowers had a career-high 30 points to go along with 12 rebounds for her 12th double-double of the season and 19th of her career. Bowers 13-of-18 from the field and 4-of-5 from the foul line. The nation’s leader in offensive rebounding, Bowers added to that total with seven offensive boards on Saturday. She added one steal to give her 154 for her career, putting her in a tie with Lara Webb for eighth place on LU’s all-time list.

“Kiandra is unstoppable,” LU coach Robin Harmony said. “We haven’t found anyone in the league who has been able to stop her.”

McNeese (10-12, 5-6) had no answer for LU’s inside game, as the Cardinals doubled up the Cowgirls in points in the paint, 44-22. Several of those points came as the result of McNeese’s 21 turnovers, as LU outscored McNeese 31-10 in points off turnovers.

“I came out and wanted to be aggressive,” Bowers said. “We made crisp passes and cut well and that’s why we were able to have success.”

LU never trailed in Saturday’s contest as it got a bit of revenge for last season, when McNeese went 3-0 against the Cardinals, including an 88-78 come-from-behind win in the second round of the Southland Conference Tournament.

While Bowers, who notched her third straight double-double, did the bulk of the damage, she wasn’t alone in leading the Cardinals to their fourth straight win while boosting their home record to 12-0. Moe Kinard had 13 points, Ashlan Miles came off the bench to score 11 points, while Chastadie Barrs and Kiara Desamours had nine points each. Barrs, the nation’s leader in steals had five on Saturday, and added to her conference-leading assist total with seven.

LU never trailed in the game, scoring the first six points of the contest en route to a 20-7 lead after the opening quarter. McNeese, which dropped its fourth straight game, never got closer than six points the rest of the way.

“It’s hard to come back on us once we build a lead at home,” Harmony said. “Our girls love playing at home and it shows.”

LU outrebounded McNeese 44-33 on the day, holding a 22-13 advantage in second-chance points. LU, which entered the game second in the nation in offensive rebounding, pulled down 23 offensive boards Saturday.

Amber Donnes had 19 points for McNeese, while Dede Sheppard came off the bench to score 10 points.

LU and Central Arkansas are both 9-2 in the conference, a half-game ahead of SFA, which is 8-2. Central Arkansas was a 77-55 winner over visiting Southeastern Louisiana on Saturday, while SFA dropped a 76-72 overtime decision at Northwestern State. Abilene Christina is 9-1 following Saturday’s 78-56 win over Sam Houston State, but the Wildcats, who are in their final year of transition from Division II to Division I, are not eligible to compete in the conference tournament.

The Cardinals host Sam Houston State at 5:30 p.m. Thursday before traveling to Nacogdoches for a showdown with SFA at 3:30 p.m. Saturday.

Barrs needed just 27 seconds to record her first steal of the game. The sophomore guard has at least one steal in all 52 games in her career.

LU’s win guarantees the Cardinals will finish with a winning record for the ninth time in the last 10 seasons.