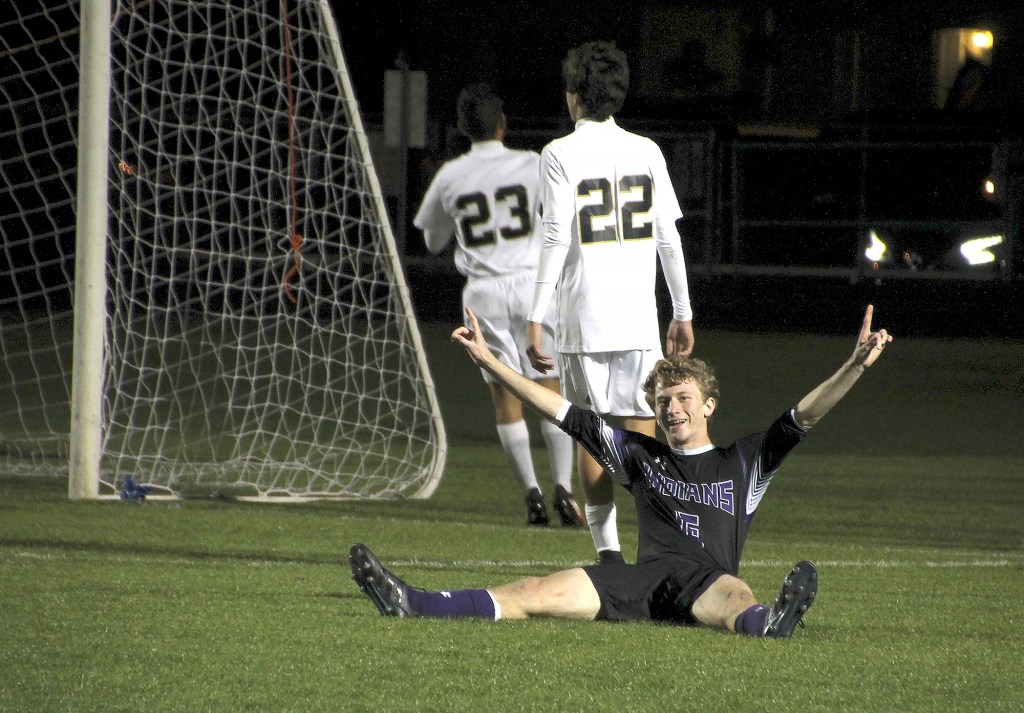 Colton Stone of PNG reacts to a goal early in the second half against Nederland on Friday at Bulldog Stadium. (I.C. Murrell/The News)

Almost 27 minutes into Friday’s girls soccer match in Port Neches, Hailey Loupe scored the first goal, and the celebration with her Port Neches-Groves teammates was on.

A few miles southwest in Nederland, PNG’s boys team was having twice as much fun.

The PNG girls team protected their home field in their own Mid-County Madness showdown, taking a 2-0 win over the previously unbeaten Bulldogs (7-1-2, 1-1-1 in District 22-5A). The Indian boys remained unbeaten in district play with a 4-0 win.

“We had done some things,” PNG boys coach Chad Luttrull said. “We had some kids really step up. We have young kids step up. We have several seniors on our team. They work hard in practice, and it carries over in games.”

The PNG girls team (9-1-1, 2-1) made their score 2-0 in the second half when Elizabeth Bolyard netted a goal off a Grace Seymour free kick. Loupe took the handle from a Sophie Brant kick for her goal.

“The defense did an outstanding job on containing [Madison] Ledet and [Meg] Sheppard and the rest of the Nederland offense,” Bates said. “Libbie [LeJeune of PNG] was solid in goal.”

Loupe and Ledet signed with Lamar on Wednesday.

Nederland goalie Emma Roccaforte, who is headed to McNeese State, made six saves.

Preston Riggs and Christian Davalos scored for the PNG boys in the first half. Colton Stone managed to punch in a short-range goal from the right-hand side early in the second half and reacted with his two index fingers pointing toward the sky while he was still sitting on the ground.

Garrison Vanhouten capped the scoring with a late penalty kick.

Luttrull also credited the Indians’ speed for their dominating performance.

“This might be one of my fastest teams I’ve coached in 11 years,” he said.

PNG’s girls team will take on upstart Port Arthur Memorial at Memorial Stadium on Tuesday in the first district meeting between both programs. Memorial’s boys team will visit PNG on Tuesday.

Grettel Vazquez and Yudith Banda each scored twice for Memorial, which is enjoying a solid start to tis first season in 22-5A after years of Class 6A play. Guadalupe Contreras accounted for the final goal.

Daphne Reyes was responsible for the shutout in the net. Memorial coach Phillip Mattingly cited the defensive work of Julisa Tejeda and Arianna Fernandez.

In Port Arthur, Memorial (1-8, 1-2 in 22-5A) registered most of its shots on goal in the first half, but the Titans came out flat in the second half as the Jaguars held on to take the victory.

Central scored with 4:43 left in the first half.

Hamshire-Fannett won the girls contest 6-0, dropping the Eagles to 3-4-1.

Thailan Wesley scored 16 points and Jomard Valsin dropped 10 in the Titans’ six-point victory, giving them a 5-1 season record against Beaumont ISD teams. Central (20-8, 10-1), which is tied with Memorial for first place in District 22-5A, handed the Titans (22-5, 10-1) their only district loss.

PORT NECHES — Going into the week, Nederland was two games behind Ozen for third place in 22-5A.

Now, the Bulldogs have drawn even.

Howard scored all but two of his points in the first quarter. Jones, who had 26 points Tuesday in a win over Ozen, knocked down four of Nederland’s nine three-point buckets.

Reid Garrett had nine points for the Bulldogs, all coming on three-balls.

Edsel Damo of PNG went on his own outside shooting barrage. He made four treys and finished with 17 points, while Hunter Curtis added nine.

PNG plays at Central on Tuesday.