Port Neches putting food trucks on the menu; discussion has begun on regulations 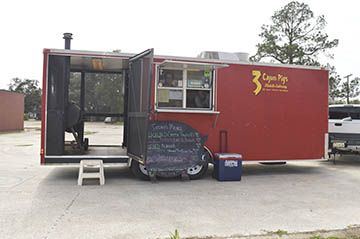 3 Cajun Pigs food truck, owned by Mark Feemster, is one of several that have made a stop in Port Neches recently. City leaders are working with food truck vendors and owners of brick and mortar eateries to possibly establish guidelines for the vendors. Mary Meaux/The News

PORT NECHES — Food trucks are a popular sight across the state, as well as the nation, and are now popping up in Port Neches.

City leaders are working with both food truck vendors and brick and mortar eateries on crafting an ordinance governing mobile concessions.

“This is a new topic for all of us pertaining to mobile food trucks, trailers and kiosks,” Port Neches City Manager Andrè Wimer said during a recently council meeting. “It’s not something we’ve had to look into in the past. Today is just for preliminary discussion and whether or not regulations are needed. We are all aware food trucks have become popular statewide and nationwide.”

City leaders created a draft ordinance pieced from other cities’ ordinances to kick off the talks. Nothing was approved during the meeting and talks will continue next month.

The ordinance gives definitions of a concession truck/trailer/kiosk and of requiring a permit. The draft states a new permit shall be obtained each calendar year, from Jan. 1 through Dec. 31. The annual permit is valid from the date the permit is obtained and expires on Dec. 31 of each year, according to the document.

Some of the other requirements include: A Jefferson County Health Department permit, copy of the current signed lease or approval from the property owner to utilize the property in which the concession is to be conducted, sales tax identification number and the city indicated as the origin of sales and an annual permit fee of $500 per concession.

Wimer said there has been somewhat of a disagreement from the brick and mortar establishments of the vendors’ perspective.

Mark Feemster has been operating his 3 Cajun Pigs food truck for several years and most recently has been parking along Port Neches Avenue.

“There is nothing in here (draft ordinance) that really surprised me,” Feemster said. “I’ve seen it in many cities and it looks pretty standard.”

“I agree with him,” Simoneaux said of Feemster’s comment. “I just bought a brand spanking new trailer. I think this will do good on Port Neches Avenue. I’ll do whatever helps Port Neches.”

Mayor Glenn Johnson said Simoneaux may be exempt from some of the regulations because he owns the property where his trailer will be posted at.

Tyler Blount, co-owner of Neches Brewing Company on the Avenue, has seen much success with the recently opened business and now he is looking at operating a food truck as well.

“We recently bought a food truck a few weeks ago and trying to get a feel for it,” Blount said. “I don’t know where we’ll put it. It’s an old Monroe’s dry cleaners truck.”

Blount asked council about the vacant land across from his property — the site of a former bank. He learned the property is owned by the Port Neches-Groves Independent School District and questions about parking would need to be directed to district officials.

Gary Richards, co-owner of Billy Joe’s BBQ located nearby on Magnolia Avenue, voiced some concern about the operation of food trucks saying that he wants to make sure they’re under the same guidelines as the brick and mortar eateries.

Donny Broussard, longtime owner of Pizza Inn on Magnolia Avenue, said the issue is “a brand new ball game to me.” He plans to attend future meetings.

Discussion will continue at the March 2 city council meeting.

“If in that time you have any questions or comments don’t feel like you have to wait until March 2,” Wimer said.

The food truck craze has spread to other areas in Southeast Texas, some of which can be found on the Beaumont Convention and Visitors Bureau webpage.

Ringing in the New Year with lions and firecrackers