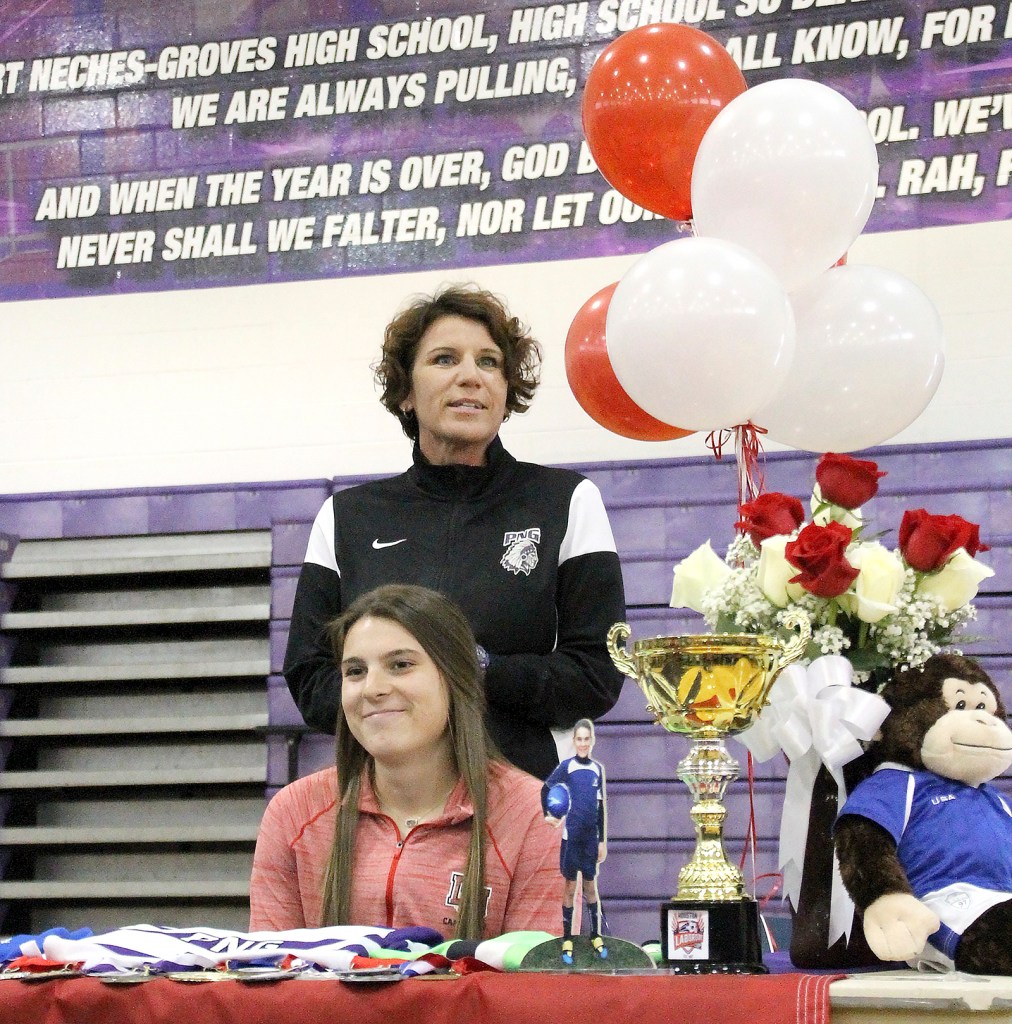 Lamar athletics have a history of bringing Nederland and Port Neches-Groves together.

Friday night, PNG midfielder Hailey Loupe will take her best shots against forward Madison Ledet and Nederland in Port Neches. Come August, the two will room together as teammates on Lamar’s soccer team.

“I can’t imagine life without Hailey,” Ledet said Wednesday after she and Loupe signed letters of intent with the Cardinals. “It’s real exciting to room with her and know who I’m rooming with. It’ll be really fun, I think.”

Ledet even made it to Loupe’s signing earlier that afternoon, the sign of a long-lasting friendship.

“We’ve been playing since we were 5 together,” Loupe said. “It’s nice to be together again, finally.”

She was hoping she and Ledet would stay on the same force for college.

“She was looking at McNeese for a while,” Roccaforte said. “We play on the same club team, same high school team. I’m sure I’ll block her shots.”

Roccaforte is likely to see plenty shots from her fellow Bulldog in the new future. Ledet is the reigning District 22-5A MVP and currently the league’s leading scorer with 18 goals and seven assists. She was first-team all-district as a freshman and the 22-5A offensive MVP as a sophomore.

For this version of Mid-County Madness, Loupe vs. Roccaforte is an attractive matchup.

Loupe, like Ledet and Roccaforte fourth-year starters in high school, has seven goals to her credit this season for the Indians (8-1-1, 1-1 in 22-5A). She scored 27 of her 51 career goals a year ago, to go along with 17 assists.

Bates said Loupe has the most powerful shot on the team.

“I’ve been coaching soccer for 17 years, so when a special player comes through, it’s easy to recognize,” Bates said. “Hailey’s a special player, and PNG is lucky to have her, and we’re excited.”

“Emma gives everything she can into a game,” Ledet said. “She stops anything. She stops balls you couldn’t imagine anyone putting in. She puts her whole heart into the game, and she’s a good teammate because she’s really encouraging on the field.”

Roccaforte is a second-year captain and three-time all-district goalkeeping MVP. The student body and National Honor Society president, who’s ranked No. 5 in her class, made second-team all-state as a sophomore and led the Bulldogs to two district championships.

“My teammates motivate me,” Roccaforte said. “I’m just preparing myself the best I can for college and take every opportunity I can to make the best saves I can.”

She chose McNeese because she was looking to continue keeping the net close to home. “I’m just glad it worked out,” she said.

So is Nederland coach Keith Barrow.

“It’s going to be fun having them close, and we can have the local high school girls come watch and have local write-ups on them,” Barrow said.

Said Bates, about Loupe: “When you have a local player at a local university, the buzz and the local support picks up. We are so lucky to see her go local.”