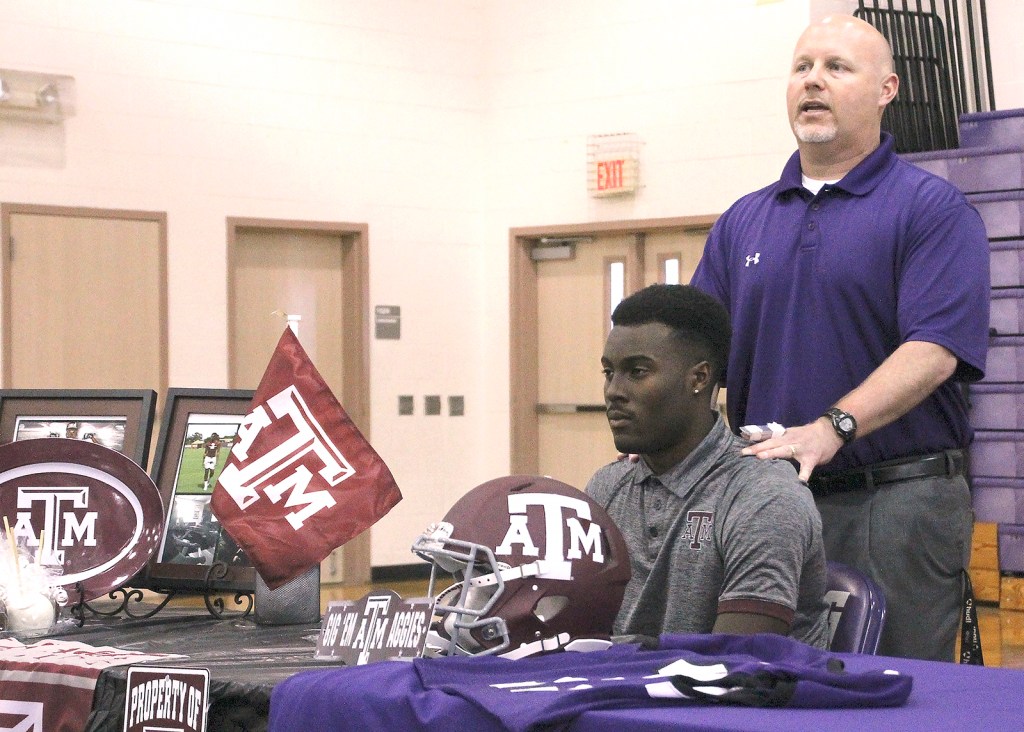 PORT NECHES — When Keynel McZeal signed his letter of intent to play football at Texas A&M on Wednesday, it was a landmark moment in the Brandon Faircloth era of Port Neches-Groves football.

McZeal became the first Indian under Faircloth to sign with a Southeastern Conference program.

“It feels good, being able to do that for PNG,” McZeal said. “They helped me a lot for four years, especially coach Faircloth. To be able to do this for him, it means a lot.”

Faircloth is no stranger to SEC talent. He was an assistant coach at Dallas Highland Park in the mid-2000s when Matthew Stafford was the Scots’ quarterback. Stafford then starred at Georgia and is now behind the controls of the Detroit Lions’ offense.

Now, McZeal will get his turn.

“We’re definitely happy for him and his family,” said Faircloth, who finished his eighth season with the Indians. “The hard work is paying off.”

McZeal is a 6-foot-4, 230-pound receiver who remained solid on the verbal commitment to the Aggies he made in June, adding there was no way he would back down from it. A&M was the highest-profile program to pursue McZeal, a three-star athlete according to 247sports.com recruited as a tight end, with Army and four other Division I programs offering him.

“I went there on a mission to get an offer from a big school like that and be able to stay in Texas,” McZeal said. He committed during a camp at the College Station campus.

McZeal was the only Indians football player to sign with a college Wednesday, but it could be the start of a PNG-to-A&M pipeline. Sophomore quarterback Roschon Johnson was offered a scholarship to A&M, but has also fielded offers from Big 12 rivals Texas and Oklahoma, just to name a few.

“Having Roschon coming up here this year is a big helpful thing,” McZeal said. “He’s a great quarterback, accuracy and all.”

McZeal caught for 537 yards and seven touchdowns in the regular season, but he suffered a hand injury before the 5A Division II playoffs. Faircloth said his physicality and blocking skills sets him apart from other receivers.

“All receivers can run routes and catch the football,” Faircloth said. “Keynel plays hard every play. He blocks. He’s very physical with the defensive backs, and he’s good at 1-on-1 coverage. He can get off blocks and make spectacular catches.

“He’s a complete player. If he doesn’t get the ball, he doesn’t care. He blocks for his teammates. He’s a team player.”

Not only that, Faircloth believes McZeal, who also plays basketball, is still growing while maintaining 4.5-second 40-yard speed.

A&M coach Kevin Sumlin told McZeal he’d have a chance to play right away as long as he competes the way he did at PNG.

“My speed is pretty much there,” McZeal said. “Me getting stronger is what I’m worried about. Getting that together, I’ll be good for next year.”