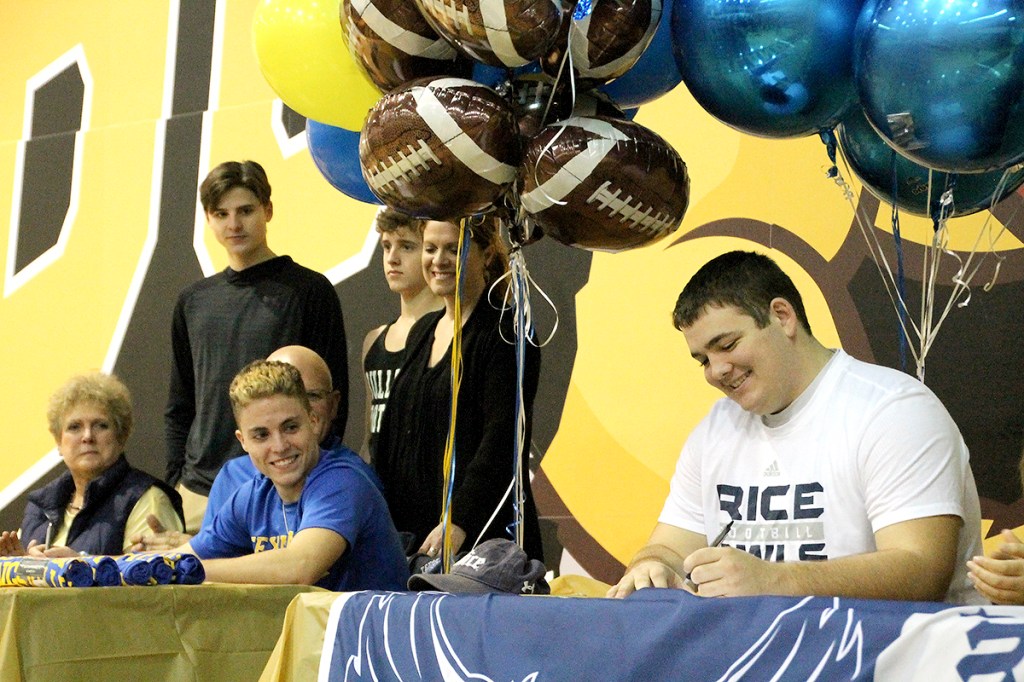 Nederland seniors Connor Perkins, seated left, and Corbin Smith, seated right, smile at each other as they sign letters of intent with Texas A&M-Kingsville and Rice, respectively, on Wednesday morning. (I.C. Murrell/The News)

**UPDATES day in which the signings were held**

NEDERLAND — Corbin Smith saw the Rice coaches paid plenty of attention to him at one of their camps.

“I don’t know if I had a bad day or whatever,” he joked. “It’s a school I always had in the back of my mind as far as where I could see myself at.”

Throughout his senior season, Smith never wavered from his oral commitment to the Owls of Conference USA. On Wednesday, the 6-foot-6 right tackle finalized that commitment in a National Signing Day ceremony at the Dog Dome.

Wide receiver Connor Perkins also inked his letter of intent to Division II Texas A&M-Kingsville in the ceremony. He said Smith was the heart and soul of the offensive line.

Smith drew looks from academically prestigious football players including Stanford and Northwestern, but drew scholarship offers from Tulane and Texas State, among others. Smith owns a 3.9 grade-point average and wants to major in engineering at Rice.

Although he honored his commitment, Smith acknowledged anything could have happened from the time he first settled on the Owls, who went 3-9 and 2-6 this past season.

“You never know what’s going to happen,” he said. “I’ve always been solid with my commitment to Rice. With what I want to do with football and academically, it’s always been a prestigious school.”

Smith expects to redshirt this fall, but he proved to be a solid blocker for at least four different starting quarterbacks at Nederland and helped the Bulldogs win shares of the 2014 and 2015 District 22-5A championships.

If he doesn’t redshirt, he’ll get to play with the Owls against Stanford on Aug. 26 in the Sydney Cup in Australia, the Pac-12 announced Wednesday. California and Hawaii squared off in Sydney last season.

Perkins is going to a tradition-rich school in the Lone Star Conference that finished 9-3 and beat Southern Arkansas 24-17 in the Live United Bowl in Texarkana, Ark. Among the Javelinas’ victories was a 31-22 win over Southland Conference member Incarnate Word in the opener. Their three losses, all consecutive, were determined by five points combined.

“When I went there, the tradition, the people made it a fit for me,” Perkins said. “It felt like home.”

Perkins caught five touchdown passes out of 22 receptions for 225 yards. Three of his TD catches went for more than 50 yards.

He also rushed for a touchdown.