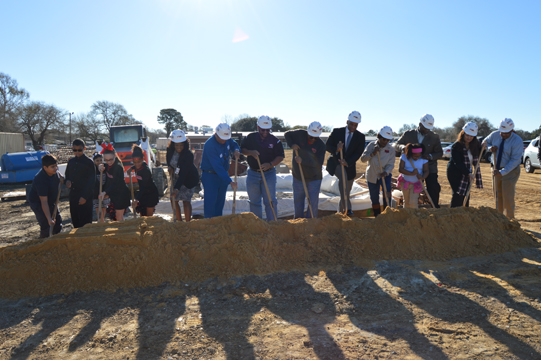 The sun shone bright on a cloudless morning as officials gathered at the construction site for the groundbreaking ceremony at Sam Houston Elementary School on Tuesday.

The groundbreaking was the latest step for the Port Arthur elementary school in achieving its plans for a new building and campus.

“Through Christ all things are possible,” Sharp said before the church figures led a string of blessings from each church leader for the new campus. 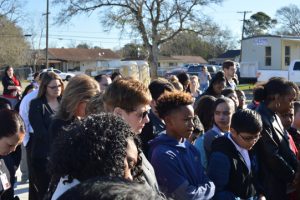 In his official welcome and introduction, Dr. Mark Porterie echoed those statements, saying, “When God is in the midst, how can we fail?”

Porterie also introduced several members from the Port Arthur ISD board, as well as pastors and the contractors responsible for designing and overseeing the project.

PAISD Board President Kenneth Lofton, Sr. spoke on behalf of the trustees.

“We’re so excited that we can have a new campus,” Lofton said. “I would like to add that this has been a long time coming. Driving along 39th Street, we would be able to see the brand new school in the midst of Port Arthur.”

“This reaffirms the guiding principles that this building was meant to stand on,” she said. “This new standard enhances our students and benefits the community. It rededicates PAISD’s commitment to excellence.”

Sharp thanked the PAISD board and the citizens for their generous support.

In closing, Porterie related how 25 years ago he worked his first teaching position at Sam Houston; 10 years later, he returned as its principal.

“I had a wonderful time here at Sam Houston!” Porterie exclaimed. “The students, the parents and the staff have always been fantastic! All the learning is tiptop; I want the academics to soar!”

In directing his attention to the students gathered at the ceremony, Porteire told them: “You’re smart; you’re beautiful — you deserve the best that we can offer!” 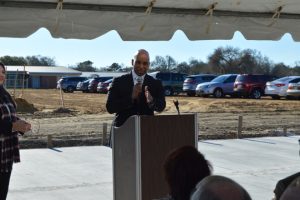 After the event, Sharp elaborated on what the groundbreaking meant to her.

Sharp framed such hardships faced by the school like electrical fires, leaky roofs and wildlife critters as obstacles to the goal of learning.

“We’ve had to set pots around the floor to catch the rainwater. We’ve had raccoons, squirrels and even snakes get into the rooms,” Sharp said.

“That makes a hard day of work for the teachers and for the students. It all interrupts with the daily routine.”

“By having these new buildings, we don’t have any obstacles; we can operate with more efficiency than before,” she said. “We’ll have an environment that is very beautiful and clean.”

The new building is scheduled to be completed in the summer of 2018, in time to start the new 2018-2019 school year, according to Sharp.

The new school building will hold 700 students. Sharp said they currently have 650 students.

Once the building is completed and the students and staff have been moved into it, the portable buildings will be removed and the old building torn down.

According to Sharp, the newly cleared area will be repurposed for much-needed teacher and visitor parking.

Jefferson County Precinct 8 Justice of the Peace Tom Gillam III is in stable condition after being injured from a... read more