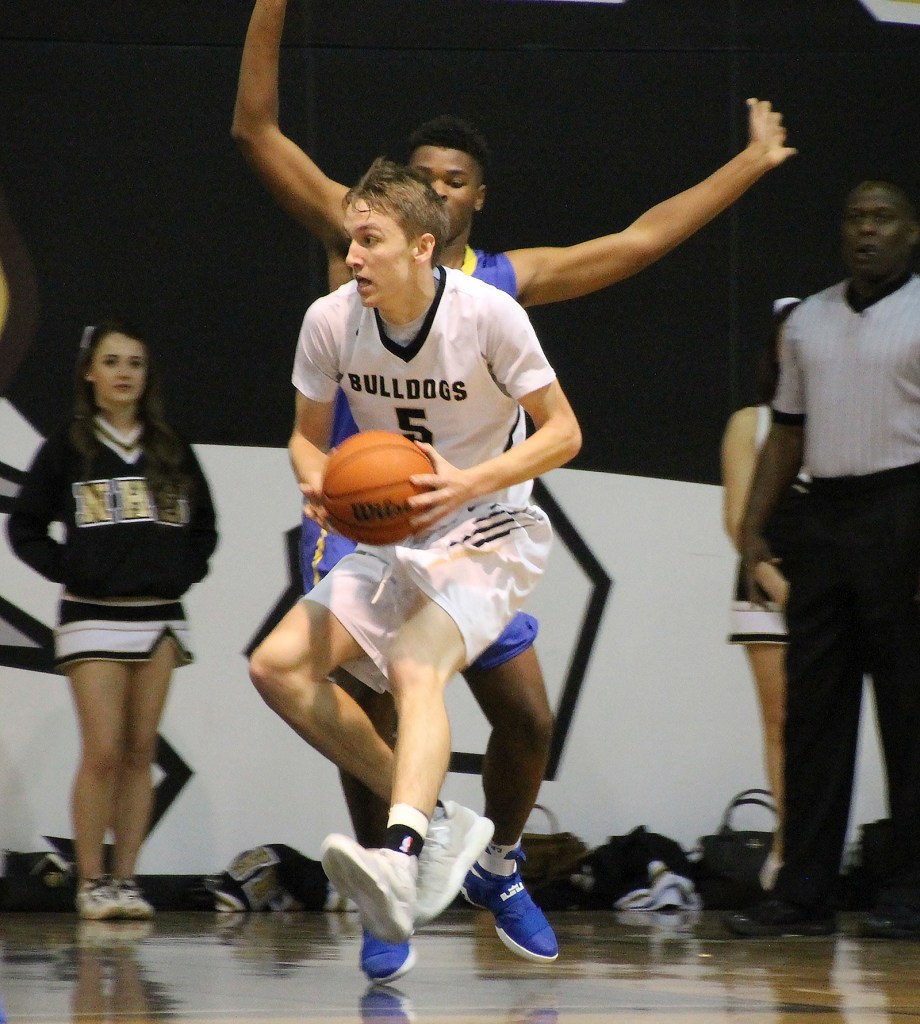 Kevin Howard of Nederland spins around an Ozen defender before taking a shot in the first quarter Tuesday night. (I.C. Murrell/The News)

The News staff reports and The Orange Leader

NEDERLAND — Three years of consecutive defeats against Beaumont ISD teams are now in the rear window of the Nederland boys basketball team.

Darrell Jones and Kevin Howard each finished with double-doubles, powering the Bulldogs to a 69-56 win over Ozen on Tuesday night. It was Nederland’s first win over a Beaumont ISD team since Jan. 17, 2014, when the Bulldogs won at Central.

Hayden Hefner had 15 points and Jonathan Rayford threw in nine.

“We played hard and got over the hump,” Nederland coach Brian English said. “We didn’t get close, we won big. I’m proud of them.”

Courtland Pender led Ozen (17-8, 7-3) with 21 points, and Tyler Broussard added 10. The Panthers played without coach Marquis Saveat for a third straight game as the Beaumont ISD placed him on administrative leave pending an investigation into missing funds from a Thanksgiving-break tournament.

Ozen is still a game ahead of Nederland for third place in District 22-5A, but the Panthers’ chances of winning a district championship are now hindered with four games remaining.

In Port Arthur, Memorial (21-5, 9-1 in 22-5A) held Lumberton to single-digit scoring in three periods Tuesday and got three scorers in double figures.

Memorial held a 37-11 halftime lead, holding Lumberton (7-18, 2-8) to four points in the first quarter and seven each in the second and fourth periods.

SABINE PASS — A strong second half on defense and 34 points by Jamyus Jones gave Sabine Pass (7-15, 2-3 in 24-2A) separation from Hull-Daisetta in a big district win.

The Sharks outscored H-D 35-15 in the second half.

VIDOR — The Pirates (2-8 in 22-5A) earned their second straight victory after an 0-8 start to district play behind 16 points each from Gage Galloway and Maverick Quirante.

T.J. Jordan made four three-point baskets in the first period and finished with 16 points to lead PNG (6-18, 2-8), which is tied with Vidor and Lumberton at the bottom of the district standings. Jordan hit a fifth trey in the third quarter.

The Bears controlled the ball and the clock throughout most of the first quarter and led 7-2 at the end of the period and led throughout the entire game as the Cardinals were continuously tried to play catchup.

Katon Brown had another double-double for the Bears, scoring 12 points while snagging a game-high 10 rebounds.

SILSBEE — The Silsbee Tigers, ranked No. 1 in Class 4A and in first-place in the District 22-4A race, downed the Orangefield Bobcats 131-47 at Tiger Gym Tuesday night.

BRIDGE CITY — The game was hard fought and went back and forth all night until the exciting conclusion.

Kassidy Wilbur, for the Cardinals, lead the team in points with 12 points.  Hannah Wiegreffe also had seven of her own to help the Cardinals win.

The Lady Bobcats battled hard in the fourth quarter, outscoring Silsbee 17-11 but came up just a little short.

Faith Fregia definitely had the hot hand for Orangefield as she filtered in 27 points to go along with five rebounds while Emmi Lummus had eight points, four steals and three rebounds.

Post Cameron Choate had a huge night for the Lady Bobcats. She notched a double-double, scoring 21 points while grabbing 11 rebounds and had three assists.

LUMBERTON — A goal with 2:52 left in regulation for Lumberton forced overtime, and the Raiders outpoined the Titans in a shootout to come away with a win.

The Titans had 10-6 advantage on shots on goal. Saul Ayon came up with 13 saves in the loss.

Gilbert Munguia and Sanchez scored the shootout goals for Memorial, which hosts Central on Friday.

LAFAYETTE, La. — Bob Hope took on the nation’s second-ranked soccer team at the University of Louisiana at Lafayette, and St. Paul’s of Covington lived up to the hype.

Bob Hope trailed 3-0 at the half as the goaltender went down with an injury, but the Eagles didn’t go away easily has St. Paul’s had beaten bigger schools by similar scores.

VIDOR — Port Neches-Groves took 30 shots on goal to Vidor’s five, but was outscored after a scoreless regulation in taking its first defeat of the season.

“My defense did a good job of limiting the time they were back there,” PNG coach Aimee Bates said. “Things just weren’t quite going our way.”

From the Triangle to the Super Bowl: Local ‘alumni’…